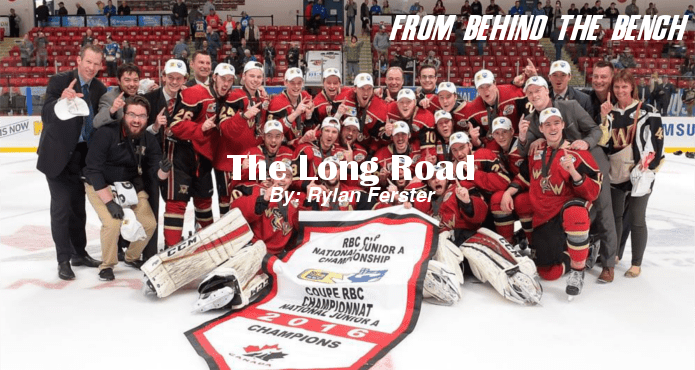 Rylan Ferster, Head Coach of the West Kelowna Warriors, just led his team to the franchise’s first national championship. Anyone familiar with Junior Hockey knows that the path to the finals is gruelling and that a spot in the playoffs is hard fought and well deserved. This isn’t Ferster’s first time winning the Cup, he got there as a player in 1990 with the Vernon Lakers. Since then, his own path has been long and winding. He played and coached professional hockey in Europe for six years, and for the past decade, he has coached or managed several teams in the BC Hockey League, including the Victoria Grizzlies and the Salmon Arm Silverbacks. He also took Team Canada West to two silver medals at the World Junior “A” Challenge first as Assistant Coach and then as Head Coach.

In this installation of FROM BEHIND THE BENCH, Rylan recounts what it’s like, and what it takes, to make it through the BC Hockey League, then the Western Canada Cup to, finally, the top prize at the RBC Cup.

We played Salmon Arm our first round, which is a very good team. We had a really tough series there, we were two big, physical teams going at each other really hard. It was very good hockey and it battle tested us in a way. After we won, we had to go on and play Penticton, which was a bit of a different challenge. They are arguably the best team in the country. We were down 2-0, and I think everyone was writing us off, maybe deservedly so, especially if history had anything to do with it. But we came back and had a couple good games, our goaltending was good, and we were able to move on from there.

And then you get into a round robin, and that brought in a totally different challenge. We thought were built for a seven game series, we had that down, and now you have the one game showdown so you have to adjust your playing. Chilliwack and Nanaimo had been through it before so maybe they knew how to deal with it a bit better than we did because it was new for us. It came down to overtime in the final game against Nanaimo and it could have gone either way.

Then you jump to another seven game series, which was again really difficult, we were playing Chilliwack, and they are another very good team. I thought our two teams were very much alike, really big back ends, skill up front, good goaltending. It was a good match up and it went six games. Looking back, any one of those teams—Salmon Arm, Penticton, Chilliwack or Nanaimo—could have won our league and I don’t think anyone would have batted an eye. So, just to get out of our league was so tough, and that’s a credit to the coaches and the programs they run.

After we won the Western Canada Cup, people were calling us the underdog and a Cinderella story but we never really felt like it. We thought we had a good team, and I think people close to us in our league thought we had a good team too. Obviously going up against Penticton, yes, we’re the underdog, and that also comes down to the history we’ve had with them. But we had respect within our league and I think we were right in the mix with all the other good teams.

Once playoffs start, it’s a physical and mental grind but I think players are ready for it. Players are so much more prepared physically and mentally nowadays that when playoffs do come around, they know what’s at stake. But it is a grind, everyone knows that, so you have to just keep pushing forward.

So then you get to that point in the season where now you’re at the national tournament and you can see the light at the end of the tunnel. There are five teams left in the country and you’re still one of them so the energy around the event starts to feel pretty amazing.

A big shout out goes to Estevan who hosted the Western Canada Cup and Lloydminster who hosted the RBC Cup. I can’t say enough about how well those two events were run, by the committees but also by the people who took us in. In Estevan, the hotel staff wanted pictures with us, the manager was tweeting about us, and they treated us unbelievably well. In Lloydminster it was the same thing, we were welcomed with open arms and had beyond everything we needed.

A lot of guys had never been to the prairies before and didn’t know what prairie people are like. Before we got off the bus in Estevan, I said to the guys, ‘We’re in Saskatchewan now and the people in this province are very proud and they’re going to treat you the right way so make sure you treat them the right way back.’ And I was right, we were treated like kings. I’m from Prince Albert, Saskatchewan and I know that a guy would drive four hours to help you change a tire and wouldn’t bat an eye so it wasn’t so much of a surprise to me.

But the hospitality was unbelievable. Kylar Hope’s parents had the team out to their house three times and the players and their parents out twice. They opened up their house to that many people and didn’t think twice about it, so all of that, the big welcomes and the community support, really adds to the experience.

Then on the ice it was a battle until the very end and obviously we are very happy with the outcome. Playoffs are really about three things: good health, good luck and good goaltending. For the most part, we had that. We got banged up here and there, you’re going to get banged up when you play that many games in that short of time, it’s inevitable. Kylar Hope had a separated shoulder and a broken hand and in the second last game at the national tournament, Jonathan Desbiens separated his shoulder and I still don’t know how he played the next day, but he scored the game win. We talked a lot about just staying in the moment. Make your best shift the one you’re in and just be in the moment. No matter what happens, let’s just be in this moment here.

One thing we’re really happy about here is for our owner Mark Cheyne, no one deserves it more than him. It’s one thing to be the owner and pay the bills, there are lots of people who can do that. I think things start from the top down and Mark is a great guy and he cares about the kids and he’s part of it all. He even helps us load the bus, it’s just what he does.

I think it’s so important to surround yourself with good people. We are very lucky here, I have Shae Naka (Associate Head Coach/Assistant GM) and Cory Cross (Assistant Coach), Brent Gough, who was our Assistant Coach for five years and is now Director of Player Personnel and whose handprints are all over this team, still checks in a couple times a week. And the rest of the staff are really good, dedicated people.

It’s important to have support like that because the game has changed and it keeps changing. Coaching today is down to a science, and kids are much smarter these days too. Players want answers and they have no problem asking for them, so you have to be ready. A few years ago, a coach might have been able to sort of rule in a different way—I tell you to do it and you do it. Coaching is not like that any more, kids want to know why and they have ideas and input and you have to be prepared for that.

Coaching in our league now is so good, not that it was bad before, but it’s at a new level now because there are so many things at your fingertips to help you analyze and make decisions. No one is pulling a fast one on anyone and the players and coaches have to work extra hard to compete.

People don’t always realize how hard coaches work. Some people think this is a glamorous job, but there are a lot of days when it’s not. I’m fortunate enough to go to the rink every day and I feel privileged and honoured to do that but hockey is not always fun, it’s a grind and it can be really tough.

I think the one thing I’ve learned over the years is you have to coach the team you have. I don’t think your philosophies change that much year to year, but sometimes you want to coach a certain way but you might not have that type of team or those kinds of players, so you you have to adjust. I think over the years what I’ve done is try to read my team a little bit better instead of just saying, ‘This is the way we’re going to play.’ Next year again we’ll have a totally different team and my philosophies and morals won’t change but I might have to change the way I expect the team to play.

One thing that I remind the team and the staff is that everybody is relevant in some way. You might not be the guy tonight but three games from now, you are the guy, and maybe it’s just a small shift that you do something really good on. But everyone is relevant and everyone can share in success. When you have success like a a national championship, the platform is big enough and there is a big enough pay off for everyone to share it.