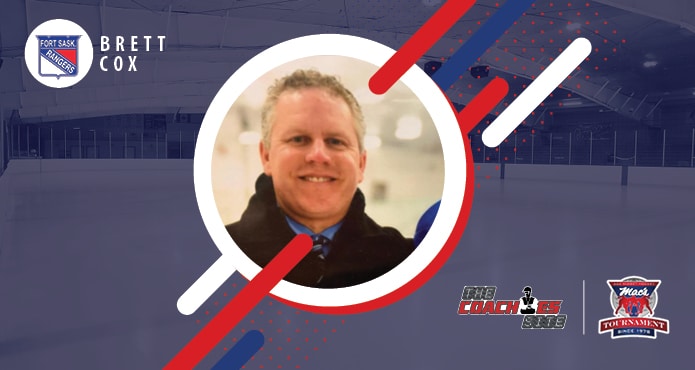 “The moment you think you are better than you are, you’re not helping the team anymore.”
5
(1)

“You live once and you’ve got to enjoy life, and hockey was a huge part.”

Brett Cox teaches for a living – on and off the ice.

A teacher by trade, Cox has jumped into coaching a few different times in his life, putting his career to the side to experience his other passion.

“One fateful afternoon, my wife answered the phone, brought it to me and said, “it’s Mike Babcock. This isn’t going to be good,” Cox chuckles. “I had been down in Spokane and went on the ice just to help out and a relationship was formed there. Later he said, ‘why don’t you fly down to Spokane tomorrow, I’ve got everything booked.’

“So, on the last week of school I went down to Spokane and met with Mike, we went for a five mile run, that I did not enjoy, but it was part of the interview. I spent a year there as an Assistant Coach and at that point, I was all in.”

The Coaches Site had the opportunity to sit down with Cox as his team, the Fort Saskatchewan Rangers, prepared for the Mac’s Tournament; we discussed how to challenge your team, staying connected with his players and finding his classroom, outside of his educational background.

After you got that call from Mike, where was your head at and where did you think this was going to lead you?

“I knew I wanted to be a teacher, so I think it’s always been in the bloodstream. That was the year he coached the World Juniors so he gave me the opportunity to run the team while he was gone for the five weeks. At that point I knew I had a 10-year window with teaching before I’d have to go to University again to upgrade, so the ninth year I was married and had two kids and were expecting our third and realized there’s more important things than living the dream of coaching full-time.”

During that last season, 2006-2007, you joined the Fort Saskatchewan Traders and eventually were named Coach of the Year for the AJHL. What led you to that position?

“Fort Saskatchewan is home for us, so I played for the Traders growing up. I was teaching in Edmonton and watching the games and they were really struggling. Whether it’s the part in you that wants to see success with the local team, or what, but I had heard rumours they were looking to move the team, so I called the owner and said “I’ll coach, little or nothing, I want to give it the old college try to keep the team in town.” At the end of the year, I found out the deal to relocate was already signed, sealed and delivered.

“But that year was awesome. We started 9-1 and we went from last place the year before, to losing in six games to Camrose, who went on to win the league. We had Shannon Szabados, a future two-time Olympic Gold Medal winner with Team Canada, as a 20-year-old and she set all kinds of records in the league that year. It was the greatest experience for me to see them make a good run and see the rink packed, but unfortunately, we fell a bit short.”

Heading into the Mac’s Tournament, what is the feel you have for your team and what are your expectations in the series?

“The team we have this year, there are no real superstars so we need four lines that can play, six defensemen and two goalies to make this work. We said at the beginning, if you’re on this team, you’re going to get a chance to play on the power play or penalty kill. If you can’t, you can’t be on our team.

“We actually cut some kids who were probably in our top 12, but they weren’t going to excel in one of those two things, so we just let them go.

“We haven’t matched lines once this year. Even when I coached junior, I would pride myself that every kid would play at least two shifts a period, regardless. For me, a big thing is selling kids on a role, if you sell them, you’ve got them. Bottom line is everyone on the game card knows what their role is for that night.

“My assistant coach, Stacey Rayan, played in this tournament and I knew he had success, but we hadn’t really talked about it and I was doing some research and realized Stacey was the leading scorer of the tournament and had been to the final.

“So, I said to him “I’ve never won this tournament, tell me about it” and he said “our team was pretty similar to the team we have now. We just played hockey, we didn’t know we weren’t supposed to be that good, we just played.”

How do you help your players adjust to that role and how do you challenge them to take on that responsibility?

“About three or four games ago our PP was getting a little lazy and so we created a third PP line, four defensemen and one forward, with no business to be on the power play, but you feel really good as a coach when you do that and they produce.

“The PP3 unit went out and scored two goals. So, some kids are asking to move up to one of the other units and I said absolutely not. The reason you’re on PP3 and PK is because that’s where you can help our team. The moment you think you are better than you are, you’re not helping the team anymore.

“It’s funny to see some guys who pout a little bit, but deep down they’re happier than hell to see those other guys score.”

How have you learned and developed yourself as a coach over these years and different levels?

“I was probably far too intense when I was younger. You’re just trying to provide every possible angle to be the best, especially in practice, but if it doesn’t fit for you, don’t do it. I’ve had one of my 20-year-olds come back and say to me “It’s great that we are doing these drills every day, but half the players can’t do them, and it makes no sense why we are doing them.” That was a huge learning lesson.

“I remember having three VHS machines going after every game and had a tape for each player because I thought they needed to see it and would be there for hours and now it’s so much easier of course, but you communicate through your phone.

“The biggest learning curve for me has been how to communicate with kids. You’ve got to get to know them inside and outside, what makes them tick. They have to know you care. In the old days it was very different, I didn’t talk to the coach at all, but now it’s constant.”

Teaching has obviously been a big part of who you are outside and inside the rink. How have those two areas of your life worked together?

“I’m now in HR with the school board and I know through COVID, for me, the bottom line is, if I didn’t have coaching, life would suck. That’s my classroom. That’s my chance to interact with kids. No one is in this to get rich, everyone is doing it for the right reasons. And at home too. Family is always important, if you don’t have the family support it never works. You try to balance it all and bring out the best in everyone. I have a very supportive wife who knew hockey was in the blood.

“For me now, I sit back and watch other games and I love watching the bench, seeing how that coach manages it, watching them to see who is losing their mind or who is having fun and that’s how it is for me, it’s more fun coaching than worrying about the wins and losses and stressing over that.

“It’s just something I love doing.”