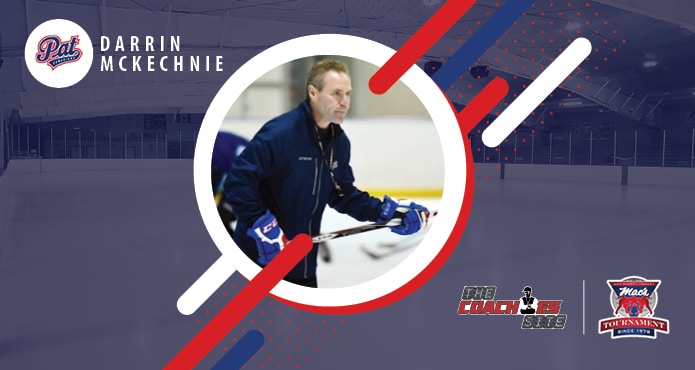 "...you’ve got play hard for me, because I will hold you accountable, and sometimes that’s not the easiest thing for kids these days."
5
(1)

What do a SWAT team and a hockey team have in common?

A lot more than you would think.

He’s been with the Regina Police Department for 28 years, 12 of those with the city’s SWAT unit.

“A lot of what I bring to sport I’ve learned from policing,” McKechnie admits. “At SWAT, there’s no room for mistakes. If you’re on an elite team like that and get called into an emergency situation, your worst day has to be better than the bad guy’s best day, otherwise accidents happen.”

You could only imagine the intimidation factor when you show up at the rink and your coach carries a badge and has likely been in raids you’ve only watched on Netflix.

But McKechnie has fun with it too.

“I always try to team build, every year since the kids have been old enough to understand, I bring them into my world a bit,” McKechnie shares. “I have pictures of Peewees wearing SWAT vests down to their knees, it’s pretty funny. I find so many similarities and the kids get a kick out of it as well.”

The Coaches’ Site had the opportunity to sit down with McKechnie as his team, the Regina Pat Canadians, prepared for the Mac’s Tournament; we discussed what he’s learned from his mentors, an improbable championship run and a connection that goes much deeper than just the game itself.

You were a real good player for the Regina Pats (53 goal scorer in 1987-88) and the University of Regina, but didn’t play any further than that. Any reason, and was coaching something you ever thought about at that time?

“When my university career was done, I jumped right into my policing career. I must have worked for about four years because my last year as a player, the guys that were in their first year, when I came back at U of Regina to help out, they were in their fifth year, so I ended up coaching some of my former teammates.

“After that, Bill Liskowich retired and the University brought in a new coach, so I had applied for the head coaching job, but didn’t get it. It ended up being a blessing in disguise because I’ve had a great policing career that is coming to an end, as I plan on retiring in 2022.”

You coached minor hockey for a few years. Spent time with Regina in the Western Hockey League, but then joined the Pat Canadians U18 team that you are with now. How did that come about?

“When my son turned into a hockey player, I ended up coaching all the way up to his Midget AA year, while I was an assistant with the Regina Pats (WHL) and the following year, I had to step down from the Pats because I got promoted at work.

“Funny enough, the guy who got that job left an opening with the Midget AAAs, so I applied and was fortunate enough to get that job. This is my 8th year with the Canadians, and it’s been just a great age group, I love it.”

How have you seen the players individually change since you’ve started coaching or even since you finished playing?

“There’s definitely a change and I think it’s from year-to-year. I think the gap COVID left has made it more noticeable. Kids are different, it’s been more of a gradual change, but I find there’s more emphasis on talent and individual skill. You’ve always had to find out what makes all 20 players tick, but before you could usually group about 12 of them together and they have the same mindset, and you may have the odd one that’s unique and now I’m finding it’s the opposite.

“You’ve got to be a guidance counsellor sometimes, along with being a hockey coach. I look back to my first year and I think it was easier to get kids motivated and going compared to now because of the uniqueness of each personality.

“As an example, my son played junior and he was a third line guy and he had a few tilts and was a middle weight guy in junior hockey. I used to laugh saying he’s got 5, 6, 7 fights and I used to have 5 fights a year and I won most sportsmanlike for my team, but that was the game then, right?”

Bill Liskowich gave you your start at the University level, what did you learn most from him?

“Bill is my main mentor and I’m blessed that one of his son’s Todd, is one of my assistants. I loved the way he related to his players. Any of his players could call him at 3 in the morning if they had life issues. He was that kind of guy. We all loved him dearly.

“Kevin Dickie coached in University and in the WHL, I coached with him for one season and I really, really liked his passion for the game and his attention to detail.

“And Doug Sauter is another mentor of mine. If you ever hear anything about him, he was a very, very tough coach to play for. He wasn’t a X and O’s guy, but he taught me you have to work hard every shift, every game if you want to succeed and he was very much a team guy.

“I’m definitely a team coach about sacrifices for the team. I would hope I’d be considered a student of the game and have evolved, but at the same time, I know I’ve got some characteristics that people would know you’ve got play hard for me, because I will hold you accountable, and sometimes that’s not the easiest thing for kids these days.”

You had an incredible run in 2017 with the Regina Pat Canadians, winning the Mac’s Tournament over Red Deer. What do you remember most about that run?

“We were going home so many times during that tournament. We qualified on the three-way tie breaker to get out of our pool, we had to score with 12 seconds left against Fraser Valley to force overtime and win in the quarter finals. We went to triple overtime against New York and beat them and then played the next day and beat Red Deer 4-0.

“The night before the final game, people were saying if you win it, this will be the first time you’ve won it. The Pat Canadians have had such a long history and to have been there when they won their first Macs is pretty special.

“Actually, that year Adam Herold was our captain. Adam was one of the players who was killed in the Humboldt bus crash. There’s actually a picture of Adam battling in the corner with Ryan McBeath, who was from Red Deer and he was killed driving in the fog a few months apart. So, the following year that picture was used in the program because we played them in the final and we ended up winning the tournament. That is something I’ll never forget.”

What are your expectations with this year’s team?

“I always tell our teams we can be out-skilled, but we can’t be outworked. I hope we play like that. And I think we have a reputation of being a five-man unit on the ice and play a good team game.

“We are very anxious to get back and get the kids to have the wonderful experience they have at Macs. They get so much exposure and get treated so well, it’s one of those memories for young guys they never forget.”

So, if the policing career is coming to an end, does that mean you’ll jump right back into a hockey position?

“If I can find something to do in hockey, that’s my goal. I’ve done this for 28 years and I know there are other jobs for retired police officers, but I think that part of my life is over and it’s time move on to something different.

“I’m involved with the Adam Herold Legacy Foundation, and we do clinics around rural Saskatchewan that the family put together in honour of Adam, so I get plenty of opportunity to still be involved.

“If hockey is part of my future, fantastic, if not, I can always go out and just help anyone as an assistant coach or at a camp or something where I’m on the ice and having fun.”