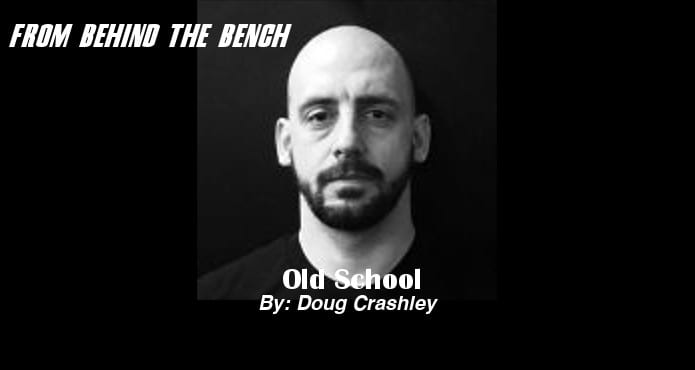 Doug “Crash” Crashley is the president of Crash Conditioning, a hockey performance centre in Calgary, Alberta. He’s seen big changes in the industry in nearly 20 years as a strength conditioning coach. He’s learned what it takes to develop young players into pros. In our newest instalment of FROM BEHIND THE BENCH, Crash gives us a glimpse of what is needed, and what’s often missing, in coaching both on the ice and away from the rink as well.

When I was going to school I actually got to the point where I turned my back on hockey. I was more into working out then I was into practicing. Like a lot of guys at that age you just want to get big and take your shirt off as much as possible. That was the beginning of my love affair with training.

I moved to Red Deer College where the team’s alumni are people like Mike Babcock who coached there. Mike Kadar, who’s now the strength coach in Detroit, was the assistant coach for the team at the time.

That was when I thought, ‘maybe I should think further on this.’ He and Mike Kadar sort of directed me. Along the way, I met people who taught me a lot about scouting players and how to manage the business side of things.

By the time I was a couple years out of school, I started having a decent following of players and I started to work my world in that direct line.

When you hear people talk about me, there are times when you hear about my reputation being an absolute bear and being intense and hard on people.

But when I first got into the industry and was around other companies, I thought there was too much time spent being buddies and trying to fool the athletes a little bit. At the time I thought people were being too soft. I noticed there wasn’t a lot of push, the kids were too much in control of how hard they had to work. They didn’t realize how much hard work it takes to be successful.

So back then, I started being known for really challenging people, no matter if they were the best people in the group or working their way from the bottom. For me, everyone has to work, I don’t care how good they think they are.

The biggest change that I’ve seen is how much time is being spent on assessment protocol and technology in training; software, measurements, heart rate monitoring, blood testing. The big one in the last couple of years is recovery. There’s a great amount of value in all of it. But now I think people are afraid of working too hard. So there’s still a little bit of the old school in me. We don’t know how hard we can work unless we do the work.

But how I perceive myself now is a little different. My focus is to connect what happens in the training setting to the actual hockey. So I spend a lot of time with goalie coaches, skating coaches, and skills coaches, trying to figure out what they’re trying to do to develop hockey players. I try to bridge that gap. That’s where I think my real brand is.

Many Spokes in the Wheel

Today in player development, there are so many aspects so you can’t just be focused on one spoke in the wheel. Whether it’s mental development, nutrition, the necessity for quality sleep, or life skills – you can’t just be a strength coach or conditioning coach or a speed coach, you need to understand how all those pieces interact. If you don’t, that’s when you have failures in training.

And that lack of communication affects the athletes. You have young players who think that in the off-season they just need to get bigger and stronger. It doesn’t work that way. They come back and all of a sudden they’re bigger but slower, or they don’t have a lot of feel for the body, or they’re not explosive or dynamic.

There’s a huge lack of communication in the message that we give to athletes, especially young athletes. Every time a player gets drafted to the National Hockey League, you just wait to see what the message is and how that’s going to affect them. Whether it’s “you gotta get bigger, or faster, or stronger”. But what does that really mean? You drafted a guy who’s 5’10”, he’s never going to be 6’2” and 230 lbs. This young man is 17 or 18 years old, and the process is going to happen how it happens because of actual physiology and maturation.

Looking back [at some of the success stories] like Thomas Hickey (NY Islanders), he’s been a client of mine since 2004 and he is exceptional. But at one point, he was told he was too slight so he was being told ‘you have to get bigger, you have to get stronger.’ And then he was told ‘maybe you’re too top heavy’. Those are the things you deal with and some of the miscommunication from a team level down.

It’s a tough road to go from bantam to the National Hockey League and it’s even tougher to stay there. He’s found his niche to a point but still has to earn his place every day.

Jordan Eberle of the Edmonton Oilers is another example. When he was first brought to me, he was 14. When I asked how good he was, I was told he’s too soft, too slow, too small.

But when you look at these guys, what they really have is integrity. They compete. Their respect for the process is what separates them from the other guys. You don’t see them looking over their shoulder and panicking, you see them looking to see what’s going on, and you see them focused on their goals. They’re competitive and they don’t like to lose.

Even if they’re not the physical specimen of some of the other guys, they have the competitiveness, the commitment, and the sense. Those things come into play more than their skating, more than their natural skill and talent. This is where working together becomes success.

I spend time in arenas, watching hockey at every level and I try and listen to people’s stories. So my biggest advantage is that I’m always asking around, watching skills coaches from everywhere, always in people’s ear. I’m always asking, ‘what are they doing differently?’ I try to see things differently, and try to connect all the pieces. And then I bring in people who are better than me so that we can all get better. I want the best of every aspect.

That is the biggest problem with my world of coaching today. Sometimes as coaches, we have a hard time working with others. It’s funny that we’re on a team sport, because we don’t necessarily want to work as teammates when we’re coaching. But the athlete needs a strong team around them and that means that we have to work together.

It’s incredible when everybody comes together and we overlap. The more we collaborate, the better the success rate of the athlete. The reality is that if we can back off from our ego and can collaborate and communicate, it will be better for all of us.

It’s not about counting reps, it’s not about lifting weight. That’s all important but what’s most important is the integration of all the components and how they fit together. Part of it takes buying in from the athletes, part of it is communication from the coaches. And then, as coaches, we have to give in to other people’s strengths if we want to be able to get the most out of our athletes. We have to be careful not to make business out of our athletes, especially our young ones. We have to think about what’s best for them. So every time we work with someone else, it makes us all better.

FROM BEHIND THE BENCH: The Unconventional Path by Rob Cookson

FROM BEHIND THE BENCH: Better Every Single Time by Gardiner MacDougall