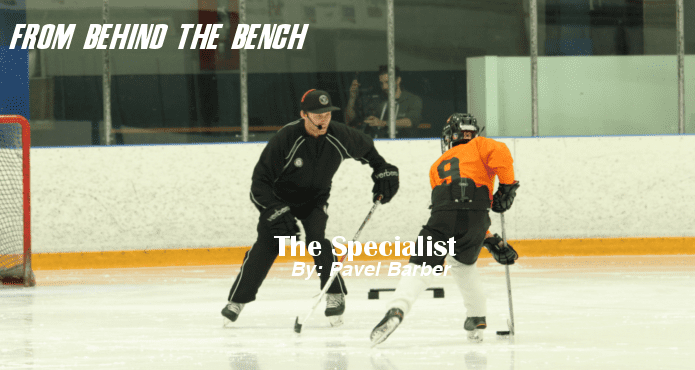 In this instalment of FROM BEHIND THE BENCH, stickhandling specialist and online phenom, Pavel Barber, gives us a glimpse into his world. With millions (and millions) of views on his YouTube and Instagram tutorials, Barber is super humble and extremely passionate about the game of hockey and his influence on young players today. He’s got great insight on how to grow the game and to make it accessible for kids everywhere, plus he shares why he loves hockey so much and has some extra advice for players of all ages.

I started on YouTube, just making a couple tutorial videos. I actually started by analyzing Pavel Datsyuk, my favourite hockey player—how he played the game, what made him so great and then how people can apply that to their game.

Then I started doing my own stuff, doing tutorials, skill moves, moves people hadn’t seen before and then breaking them down. When Instagram started with their video sharing platform, things started to explode. Now I have 401,000 followers on Instagram and 129,000 subscribers on YouTube, so it’s grown quite a bit in the past couple of years.

After that, I had a lot more people reaching out who wanted to get coached or get insight. I started to get flown out to places like Nashville, Sweden, Czech Republic, which is super cool because I love travel and I love teaching hockey, so now teaching hockey allows me to travel and reach all these kids from all over the place that I wouldn’t get to meet. When I went to Sweden, I was surprised they even knew me but there were tons of fans—we taught 1,400 kids in less than a week. It’s amazing.

The majority of who I teach is young kids. I do have a few older ones but I like the younger kids because that’s when you build the foundation that you need and when [people] are their most absorbent. So teaching kids has a greater impact when you’re trying to build good habits.

This year I started my first ever Pavel Barber Hockey School. We did Phoenix and Vancouver at Burnaby Eight Rinks, we had about 40 kids out to that one. Being able to make a hockey school and travel doing hockey schools and reach all these far out, different places is amazing—to help grow the game, and in places where it’s not very big yet.

That’s part of why I specialize a lot in the off ice portion of training because all that work off the ice, on pavement, on your roller blades and with a green biscuit puck—it’s affordable training. You’re able to be outside in the sun listening to music and working. Any way to make hockey more accessible and affordable and showing kids how to get out there and train more is where we’ve got to be if we’re going to grow this game even more.

The fact that it is growing, even in places where ice is not very accessible in certain climates, says a lot about how awesome this sport really is. It’s so strange. We’re skating on knives, the physicality, the pace of play, the skill moves—the way the game has opened up with the dangles and the speed. The fact that they went to three-on-three with overtime, we’re seeing way more dangles and highlight reel goals, end to end rushes and saves. And guys like Connor McDavid have just taken the game to somewhere where it’s just unbelievably fun to watch.

Those are just a few of the things that make hockey great.

Now my main advice for kids is to pay attention to the sports psychology side of it. We’re in an age right now where we have social media and there are comments sections where people are saying garbage things and bringing each other down. Mentally, you’ve got to believe in yourself, believe in the process, you’ve got to work hard and focus. And don’t be the type of person that has to bring others down to feel good about yourself.

Just focus on the process, on yourself, and enjoy yourself while you’re out there. Even though you’re training hard doesn’t mean you shouldn’t be having fun doing it.