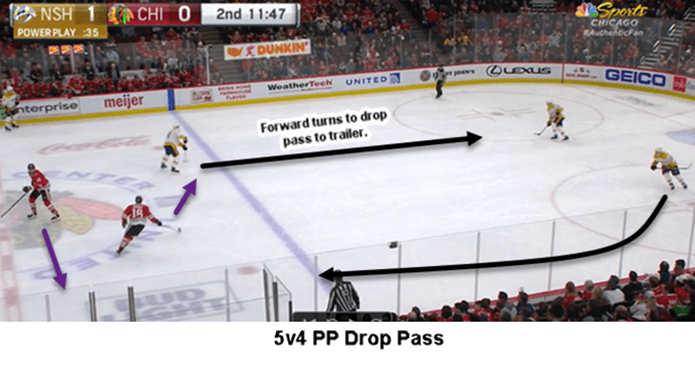 This is a special contribution from Gus Katsaros, a hockey analyst with McKeen’s Hockey focusing on the integration of analytics, video and systems analysis. Follow him on Twitter: @KatsHockey

Let’s talk about the power play drop pass, a near universally adopted tactic promoting controlled zone entries. I am not a fan of this play and question its effectiveness in light of alternatives. My disdain for the play is public and deep-rooted. I’m the minority here, but think similar efficiency can be achieved with a static player at the blueline and a stretch pass.

Oh ffs … telegraphing the damn pass WHILE THERES A MAN in the coverage lane. Lunacy. pic.twitter.com/iO5CeR9ssC

One player rushes the puck up ice, backs up forecheckers, then makes a drop pass. Sometimes, this happens and I cringe.

Players are opening their skating stance and hips, some ‘mohawk’.

Instead of attacking the puck carrier outright, forecheckers can skate up close behind to limit or intercept the pass. The tweet above shows a player in a passing lane, with another example by the Leafs’ Kasperi Kapanen.

Kapanen placed himself behind the puck carrier heading up ice on the PP. There will be more of that to foil the drop pass I’d bet. pic.twitter.com/wVOXBVoimD

My guess is teams will incorporate more of this coverage as the tactic evolves and PK improvements are applied.

Arik Parnass – now with the Colorado Avalanche – studied the effects of the drop pass in terms of offensive zone time. The study showed the drop pass zone entry created the most zone time. In-zone strategy, including set up time and the power play formation play a factor in those results. With a small sample size teams weren’t actively strategizing against this at the time of the study. The NHL is a copy-cat league and if something triggered wide-spread use of the drop pass, it would likely fall square on the results of an analytics study like this.

Teams don’t aim to generate off the rush, opting to create chances after the zone set up. Penalty killing units are doing more to adamantly hold the line to limit zone time. Dumping the puck behind the line for retrieval could be part of a controlled entry, especially if an effective behind the net strategy can be utilized.

Representing some of the elements of the drop pass could be achieved with the use of a stationary point on the offensive blueline and a stretch pass.

To create openings at the blueline, teams must:

If teams hedge on either side and create openings in the middle, forwards will have to cover – leaving space up the middle of the ice to exploit.

The aim of the drop pass:

A stretch pass creates a diversion by moving the puck up ice quick, forcing attention to one side or other. If the defense is too deep and give up real estate just inside the zone, take advantage and flood. Otherwise, these are other options.

The first is the rim around. I question using a drop pass to gain the zone with speed only to rim it around the boards to corral it on the weak side. The same goes for a cross ice pass within a few feet of the blueline.

If the puck is rimmed around the boards players can flood to support the weak side and ensure puck retrieval, then set up the 1-3-1. Players kick into high gear upon the stretch pass, ensuring the PP team gets to the rimmed/loose puck first. Holding on behind the goal line creates a unique dynamic as well.

Starting with a stretch pass the player attracts attention from the PK trying to cut down the ice and a cross ice pass potentially springs the weak side winger. At worst, the power play set up is achieved. At best, a potential scoring opportunity.

The last example is about using a player with speed through the neutral zone and a pass at top speed. The risks are reduced with the stretch pass, forcing forecheckers to pivot on the puck holder. This creates the blind spots for the PK unit and options for passes with speed. If the entry isn’t there, there’s always an option to pass it to the weak side winger to gain the zone and set up.

As the game evolves, innovative methods of breaking contemporary systems offer value and a shade of unpredictability.