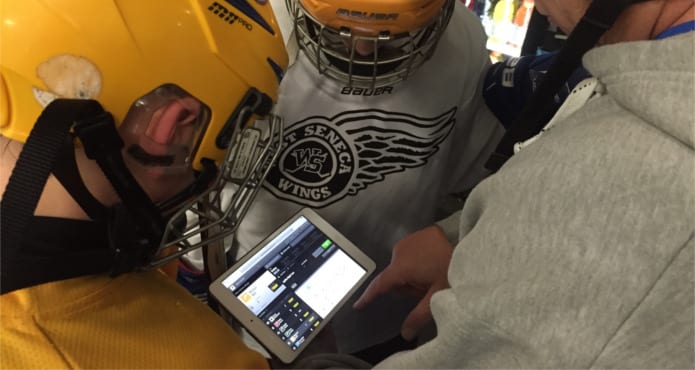 Good coaching exists in that intersection where time, passion and effort meet. And these days, a fourth element—communication and feedback—has been added to the mix. Any coach will tell you that it can be tough for everything to align. Most are volunteers with a desire to give back to the sport, while juggling the endeavour with their own personal lives.

Enter PowerPlayer. The feedback platform attempts to close the gap between what players and parents want, and what coaches can give. “It was designed to help bring some transparency into the coach, player, parent triangle,” says founder Dave Mason.

“We know from personal experience that most hockey coaches are so busy actually coaching that the communication aspects of their jobs — the all-important feedback that tells athletes and parents what’s going on — can be incredibly challenging. PowerPlayer is designed to make coaching and communicating a one-step process.”

While the idea for a platform that is both user-friendly and useful had been brewing for some time, a moment of clarity came when Mason’s own son was being approached by scouts. “My son was about 15 and was getting recruited by junior coaches. And these coaches would see him play a couple times and would ask to have a meeting,” Mason said.

He realized the process was flawed. The scouts were asking the wrong questions to the wrong person, Mason said. “They’re asking him, ‘what are your strengths? What are your weaknesses?’” A young athlete can’t answer those questions correctly, nor should they have to. But there was nowhere else that information existed.

“Imagine if that was school and I got no feedback from their teachers, no test results, no grades. You wouldn’t accept that as a parent. So, why should we accept that in youth sports?”

That question inspired Mason to begin working on designing and building the platform that would eventually become PowerPlayer. Timing helps, too. A platform like this couldn’t have existed ten years ago, both in terms of technology and in the approach coaches take. But today, young coaches, and young players, are used to a digitized world. And everyone expects unlimited information at their fingertips.

But it’s not just information for the sake of it. PowerPlayer does offer coaches a chance to record tangible data like time and shot accuracy. They can also track “soft and squishy” data like a player’s coachability or work ethic. And this can have a huge impact on players’ lives beyond the rink.

“By scoring and visualizing intangibles, PowerPlayer elevates them to a place of importance in the mind of the athlete… And over time, their maturity as people and players becomes an asset that will help them get where they are hoping to go, in hockey and in life.”

There are some questions that arise: how much is too much information? Is it too much to expect of coaches? PowerPlayer has thought of the hurdles, and has worked the solutions into the design. Coaches can make the system age- and level-appropriate; can provide one on one communication with players and parents; and can use it as much or as little as they choose.

The success of something like PowerPlayer is a result of changing times, especially at the rink. “Younger coaches are eager to get their hands on this kind of thing. It’s not a must do, it’s a want to do,” Mason said. And judging by the numbers that are signing up for the platform, there is a clear trend that this is exactly the kind of tool coaches want.

Jeremy Kavanaugh is the Head Defence Instructor with St. John’s-based Xtreme Hockey, and has integrated PowerPlayer into his program. “I like to give a detailed analysis of how each player is doing, and I really focus on providing positive comments. We love that the system allows us to really be age and skill level appropriate in our instruction, we want the kids to know that it’s ok to learn, and that everyone can get better at something,” he said.

Hockey, and youth sports in general, has become so much more than just a physical skill set. “It’s an interesting revelation for parents, and for the kids themselves, that it takes a lot of things to be a good hockey player,” Mason said. “Some of the kids in the system are not the strongest skaters in the world, but they’re rated very highly in other areas by their coaches.”

The world is going the way of information. It wasn’t long ago when, even at the top levels of sport, data was collected on spreadsheets (at best) and all too often ended up in boxes collecting dust. Now young athletes expect instant and accessible information. And coaches today are expected to keep pace.