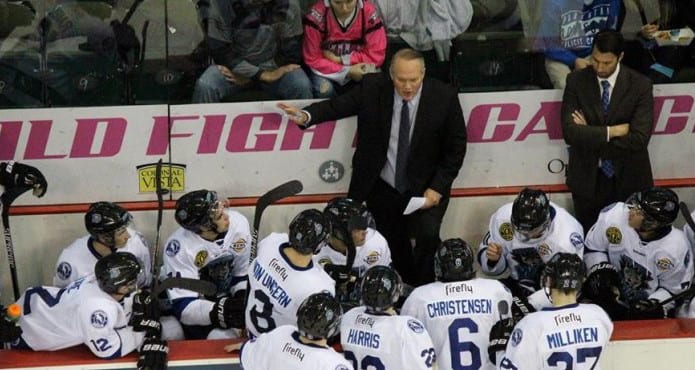 At this point last year I was flying to Lethbridge and writing about mortgages, seaplanes, and residential drainage solutions. I’d recently accepted a role as assistant coach with the UBC Men’s Hockey Team, but prior to that, it was a juggling act to keep my hockey dream alive. I suppose that juggling act never really ends. I moved to Vancouver and started a writing company so I could focus on hockey. Only problem with that is the thing you’re not focused on is what pays the bills. There’s never enough time for everything – or is that just an excuse?

I’m 35,000 feet above sea level flying to Lethbridge once again. The university hockey schedule is nice because you have all week to prepare for an opponent. The funny thing about preparation, as I’m sure you could attest, is that you’re never really finished, right? Watching video all week and settling on a strategy for every inch of the rink is obviously important, but if anyone’s found a way to feel truly satisfied about their preparation, then please, let me know.

Here’s a process I use to guide my pre scouting efforts. It’s simple and to-the-point, but most importantly it’s mentally manageable. Working at a university is all about learning; I’ve learned it’s foolish to try too much. Quality beats quantity.

What’s your team identity? Are you fast and determined like the Pittsburgh Penguins? Strong and structured like the LA Kings? Fiery and passionate like the Columbus Blue Jackets? The keys to your own team’s identity should inform your prescout. If you coach a patient team that’s good with structure and systems, then focus on your opponent’s breakouts or special teams. If you have a strong feel for your opponent’s routes and tendencies north of your own blue line, then your team should be comfortable modifying their own tactics.

On the other hand, if you coach an aggressive team that would rather make a fine mess of things and then sort out the shrapnel, then you might want to focus more on their personnel and how you can shape the match-ups to your advantage. Not sure what you’ve got? Start with face-off losses. Would your team be more comfortable with two forecheckers or pulling one out and denying passes?

Focus On What They Do, Not How They Do It

There’s no replacement for the intensity and emotion of being in the building for a hockey game. I’ve watched teams ahead of key matchups and wondered why my perception of their play doesn’t match up with my experience once the puck drops. Yeah, they’re forechecking in the neutral zone with two man pressure, but they’re hardly skating. This is going to be easy!

Are You Teaching or Preparing?

One thing I’ve learned watching video on airplanes is you can only prepare so much before you start trying to control your players’ ability to read and react. Truthfully, all we’re trying to do is teach our players to make their own reads, right? How many times have you seen your team make technically the wrong play based on your system, but it works out?

Prescouting doesn’t always have to be about what your opponent does. You might have more time for individual video feedback with your team – in university, with guys coming and going from class constantly, it’s important to be efficient. Everyone watching can learn from the guy who refuses to keep his stick on the ice when he checks. Get your stick position figured out on your side, and that should help your chances in the upcoming game.

Your prescout presentation is perceived in as many ways as players you have in the room. Keep it simple and keep it quick. You can always adjust later.

And just like flying on an airplane to Lethbridge, what makes perfect sense to you might completely fly over the head of one, two, or 10 of your players.

So be prepared for that, too.