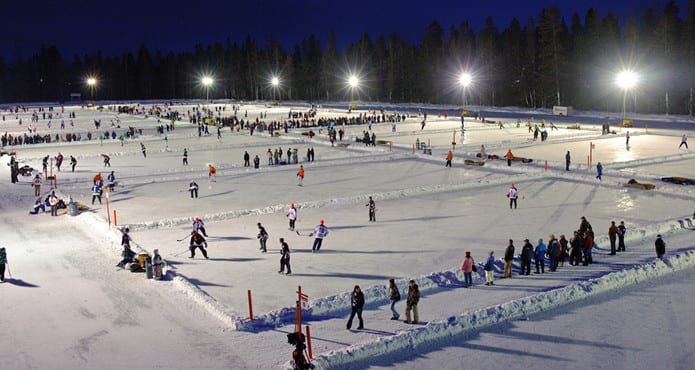 Minor hockey in Canada is wrestling with an important balancing act.

Hockey Dads are volunteering their time in arenas from Kitsilano to Tipton in North Edmonton to Halifax, Nova Scotia and everywhere in between. I’ve yet to hear a negative word regarding these Dads, and for good reason. They’re putting their skates on at 7 in the morning and herding cats while the rest of the parents relax in the stands with a hot chocolate.

But there’s one problem. A lot of these Dads are trying too hard.

Ice in Canada is expensive. When I started running private lessons at the North Shore Winter Club, I made damn sure I was giving the parents value from the first minute to the last. That meant I was running multiple drills, barking orders, and trying to cram a week’s worth of hockey development into 45 minutes. I believe the same thing happens with Dads coaching the little Timbits or Cookie Monsters.

They’re doing too much.

Teaching the kids about the game is great, but you know how kids learn best? By teaching themselves. Learning social skills such as paying attention and following instructions is a vital benefit of our game, but there’s no replacement for the natural progression of a young player who’s allowed to just play. Unstructured, fun, and free. That’s the environment in which our game is at its best, and that’s the environment in which our kids learn the best.

Don’t worry, I’m getting to the cross ice hockey bit.

A couple weeks ago my seven year-old nephew was telling me about his hockey practices. In his first year of hockey he struggled at times because he didn’t touch the puck a lot during practices. There were two reasons for this. One, he was more interested in skating around on his own. Two, there were a few kids who were way better and had the puck the majority of the time.

No problem, right? That happens. This year he’s with kids at the same skill level, but he’s still not that interested in the puck. Why? Because he doesn’t know he should be interested in the puck. He doesn’t understand. He understands that it’s fun to be on skates and skate around, but when there’s only one puck and 20 kids and you don’t grasp the concept of stickhandling and passing, let alone scoring goals, then why would you waste all your energy chasing a puck when you can just have a blast just skating around on your own?

There should be 15 minutes of free time with a hundred pucks on the ice at the beginning of every initiation practice. Maybe my nephew will discover on his own that it’s fun to fire the puck around.

The Advantage of Cross Ice Hockey

Through writing for The Coaches Site, recording the Glass & Out Podcast, and publishing videos from our Coaches’ Conferences, what’s painfully clear to me is how much our desire to win hockey games is crippling hockey at the formative stages of our game. The only argument I’ve heard against cross ice hockey is that kids won’t learn the rules of the game.

So? People making this argument are the same people who told me to work on offsides for a month with players in their final year of initiation. Well, I didn’t do that, and after a bunch of offside calls in their first game of atom hockey, the kids figured it out pretty quick. Kids are smarter than we give them credit for.

So if we can throw the rules argument out the window, then what’s stopping us from adopting cross ice hockey at younger ages?

Mark Fitzgerald – The Power of Play