How much do you believe in the importance of the game’s first shift? If the response to dropping the first two games of their series vs the Winnipeg Jets was any indication, the Minnesota Wild are big believers in setting the tone early.

Or maybe it just looks that way because they won game three so handily.

Game one and two were a different story. Winnipeg completely dominated the shot share totals 66.15 corsi for percentage is legendary if you can keep it up. Which we now know they cannot. Minnesota was ready to go from the first faceoff.

How much stock do you put in the first shift of a game?

Responding in the Playoffs

Watch Minnesota feed Winnipeg their lunch in the first shift of game 3. They’re winning every race, they’re playing inside the equipment, and the temperature of the series hits new heights in the first minute. I think my favourite part is Nino Niederreiter losing the battle of the impossible-to-spell names to Dustin Byfuglien but still does his best to make a play with the puck.

The funny thing about responses in the playoffs is everyone is so dialled and the margin of competition is so tight, that when one team is doing something right, the other is probably doing something wrong. Watch as the Jets’ number 9, Andrew Copp, receives the puck on a routine breakout and proceeds to freeze up like a Toyota Corolla parked on a Winnipeg street in February. The Jets weren’t ready to play.

Pittsburgh has seen this whole rodeo before, and Philadelphia is desperate. This first shift is a yard sale, there are bodies and pucks and gloves everywhere. the difference here is that while Philly is bringing it, Pittsburgh stays calm and weathers the storm, even getting a grade A scoring chance at the end of the shift. 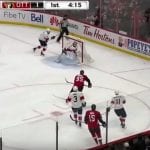 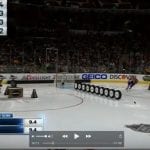 How to Leverage Hockey Technology to Boost Your Coaching Effectiveness

Coachthem Drill of the Week: Boston Net Drive 2on0