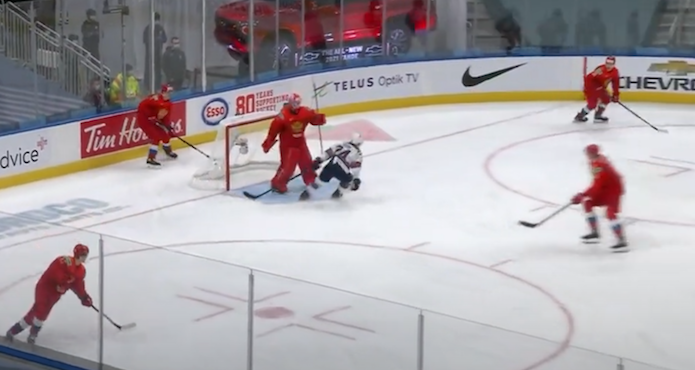 The World Juniors are a great chance to see different types of styles of play by countries around the world.

The prototypical European style is different than the style played in North America. This begins in practice, and a factor is the size of the ice. Just to compare, an NHL Rink is 26 metres wide, a Finnish rink is 28 meters wide and an Olympic rink is 30 meters wide. So, more time and space in practice leads to more puck possession before having some kind of pressure and being forced to make a play.

One thing that I have noticed this year, is how important puck possession is to the Russian team. If you watch some of the games with European teams, you will see the same thing. Why give the puck up when you have full control?

Keeping possession of the puck can keep your team fresh while the opponent gets tired from chasing you, and you can begin capitalizing on their mistakes. I’ve broken down four components that Team Russia does which are effective 2021 World Junior Championship.

Rushes can create a lot of momentum. Team Russia had an average of 43.47% successful entries into the offensive zone with full control, out of 345 tries (stats courtesy of Mikael Nahabedian).

A total of 71.01% of the zone entries were by carrying the puck, which means Russia dumps the puck in only three times out of 10.

But enough with the stats, let’s look at the tactical side.

By watching the video below, you will be able to notice some tendencies by the Russians on their rushes. Not only are they filling lanes, but you can notice the puck carrier doesn’t always stay in his lane, he can shift east/west to create confusion. They love attacking D1 with speed and skill, and if that doesn’t work, this is when they will make a short pass to their teammate.

Lastly, they don’t always enter the zone on the walls, they love going through the middle with speed.

Another strong component by Team Russia is how they control the neutral-zone when they have the puck.

Their success on entries, in large part, is due to the regroup, which is based on puck possession and not giving it up when they get pressured.

In the video below, we can see Team Russia carrying the puck, getting pressured, and electing to turn back and give the puck to their defenceman for a better option, rather than the dump and chase option. They like to release pressure by sending the puck back and using the width of the ice.

And when you have a great goalie who can handle the puck like Yaroslav Askarov, he acts like a third defenceman, and can transition the puck himself and help the team attack right away.

No team uses the controlled breakout more than Russia.