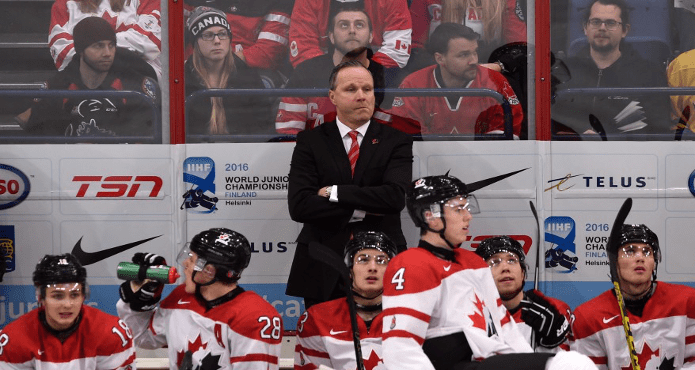 Rewind to late December, 2014. I’m asleep in a hotel in Calgary. A knock on the door at 5am was all I needed to know the worst was true. Callahan Brebner wouldn’t be playing at 9am against the New York Junior Islanders.

Nothing terrifies hockey coaches on the road more than sudden illness. Everything could be going according to plan, but the house can come crashing down in a massive hurry when a bug enters the dressing room.

And so it was last year in the prestigious Mac’s Tournament in Calgary, already down a key defensive centre in Wilson Northey (who couldn’t leave his hotel room for three days), already down defenseman Clint Colebourn, sidelined with a broken shoulder two games prior, and with defenseman Ryan Pouliot struggling to keep his wits about him in the wake of the sudden spread of the virus, that we would now play in a crucial playoff-clinching game without Brebner, a tournament all-star.

At least that’s what I thought at the time.

Short term competitions supply hockey coaches with enough surprises to last an entire season. There’s something unique about the situations in which we put our players, something magical that brings out the last thing you’d expect.

For instance, at this year’s tournament, the last thing I expected after employing 16 year-old Jack Graham in a pure shutdown role against some of the best players in North America and Austria, was that he would lead our team in goal scoring in the tournament. All that beneath the most intense spotlight of his career to date Although I should have expected it, as the same thing happened last year with Desi Burgart.

Expect and embrace the unexpected. Truthfully, the year prior, I suppose I shouldn’t have been surprised when, despite sleeping for a half hour and with nothing of substance left in his body, Brebner showed up to the rink 15 minutes before puck drop to turn in the performance of his life.

The game constantly places hurdles in our path. Sickness, injury, an unfortunate suspension, and sometimes literal hurdles blocking the highway. It’s how we deal with these situations, these thunderbolts, that counts.

I clutch several memories near to my heart of the Mac’s tournament over the years. I played in the tournament and now I’ve coached in it for four years. I’ve won a gold medal on a triple overtime goal by the current captain of the Coquitlam Express, Jackson Cressey (assisted by his current linemate, Colton Kerfoot). I’ve experienced the pain of failing to advance to the playoffs. I’ve watched our captain, Keegan Jones, vomiting on the bench in between shifts, yet demanding to go back out there.

And I’ve watched Owen Sillinger, then of the Regina Pat Canadians shake loose and score in last year’s semi-finals to put a dagger in our congested, sick chests to end last year’s run.

Which made it all the more important, when facing Regina in the playoffs for a second consecutive year, that those demons were still riding along with us. You see, when you lose, it’s like everything you fear rushing at you all at once, so when you get a chance at redemption, it’s almost like turning back the clock. A quirk in the schedule this year meant that every game we played in Calgary was an opportunity to eliminate our opponent from contention. It was the hardest run in a short term competition I’ve ever seen, playing desperate teams from Calgary, Red Deer, Tisdale and Austria.

Locked in a 2-2 draw the entire game, playing against a dynamic 5-some all bound for the WHL, this time it was our turn to shake loose. After Josh Latta put us ahead in the third, the demons vanished completely when Justin Wilson sealed the deal moments later.

Give Your Team a Chance

Eventually our run would end, but the joy of conquering that Regina forever remains. We probably put too much emphasis on beating them, exhausting ourselves in the process, but there was no way we could have won otherwise. When the final buzzer went, it was like the final scene in Return of the Jedi when Obi Wan and Darth Vader’s ghosts appear, except it was Callahan Brebner and Wilson Northey. (Both are alive and well, in case you were worried.)

All of this in one week’s time. With each short term competition, the only constant is change. All you can ask for is the chance to win your last game.

And the rest will write itself.