Simplifying the Game of Ice Hockey 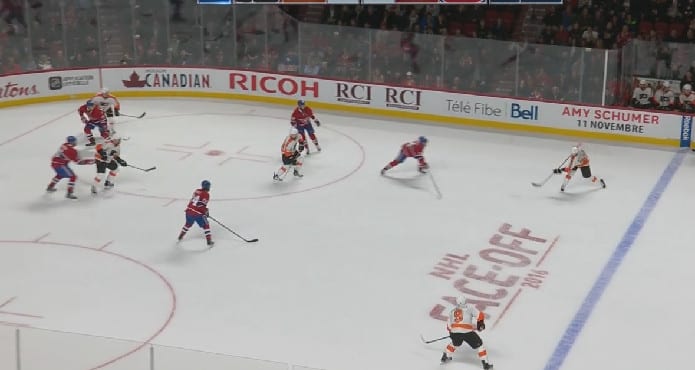 You often hear coaches talk about “working an opening” in many fluid sports. Soccer teams will probe down the right, through the middle, on the left, or through half-spaces in order to create advantageous situations for an attack. Basketball teams will run screens, pick-and-rolls, weaves, and other plays to get an open look for a teammate. Hockey teams will cycle the puck in the corner or work the puck back to the point to create time and space before attacking again.

If a team spends a good deal of time trying to find an opening, but are unsuccessful for extended periods of time, the players can become frustrated and settle for a low-percentage shot. This may happen seconds after fans, equally frustrated, start yelling “Shoot!” from the stands. A coach may even address his team’s performance by saying the team was “trying to make the perfect play” and the ubiquitous solution is to “simplify the game and get pucks to the net” or some variation thereof that includes skating: “We weren’t skating tonight” for example. Not just coaches, but players as well will think this. Goalies might love to hear this because they know the majority of shots coming their way might not be that dangerous.

But is this a valid strategy? Lots of times a coach may do this, enjoy a successful game, and then simply take credit for regression (if a team keeps shooting they will score eventually). In their minds they might believe that by simplifying the team’s game they more successful. It’s easy to be tricked by recency bias, and what a coach thinks may be helpful could actually be detrimental to their team’s performance.

Let’s do a simple exercise, shall we? Let’s say that your team loses 3-0 on a night where you outshoot the opposition 30 – 25. Your team is passing okay, but there are few times where that extra pass doesn’t connect, a player whiffs on a shot, or fumbles the pass. All told your team generates fourteen shots from multiple passes and sixteen from single passes. You, as coach, might be upset and frustrated at those lost opportunities and so you might tell your team to “simplify their game” and “get pucks on net” to create rebounds. We’ve all heard this before.

The next night you stress getting pucks on net and crashing hard, so now your players are firing away whenever they have the puck and aren’t looking to make extra passes as much. Now you take thirty-five shots, but the distribution is much different. Your players generate only six shots from multiple passes and the other twenty-nine from single passes. What is the impact?

Well, Looking at the data myself and others have collected over the last two seasons (a little over 100,000 shot sequences at 5v5 play in 1040 games), I’ve found that an extra pass before the shot leads to a scoring chance 5% more often than shot assisted by a single pass. This also explains why a team is more likely to score on a shot assisted by multiple passes than from a single pass.

So, the added volume hasn’t necessarily translated to an improved performance. Your team has gotten more shots, yes, but the nature of those shots hasn’t really made your team perform any better, despite the team looking like they are doing more on the ice. In all likelihood, the team has squandered better chances with the encouraged “shot-first” mentality.

But simply passing more often doesn’t work for every team. Teams like Philadelphia and Los Angeles will make lots of passes in their zone, but these won’t always result in a scoring chance. Philadelphia’s emphasis on low-to-high puck movement and shots from the point isn’t a great one, something L.A. does as well. In fact, I diagnosed some of the Kings’ offensive issues last summer, only for the organization itself to realize it earlier this year.

So, what we want to look at is which team is more efficient at working an opening and generating a quality chance from inside the home plate area. Here are the top ten teams in our data set at generating these plays. 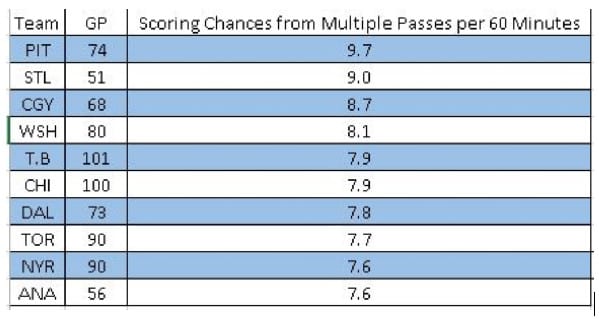 We quickly see a grouping of some of the more skilled forward groups in the league with many of these teams leading the league in scoring.

But Ryan, why not just look at scoring chances?

Well, the answer is behind the whole reason people like myself analyze hockey. While scoring chances are somewhat predictive of future scoring in this dataset, these specific types of passing plays are more predictive, which is what we’re really after. Any shot from the home plate area is good, but the situation preceding the shot has a huge impact in how dangerous that chance will be. Let’s look at a few examples to show the difference.

One of the ways the Penguins rank so highly by this metric is due to how patient their players are with the puck and also how their forwards continually seek to exploit open ice in the offensive zone. There’s a lot less standing around than you see with other teams.

In this clip, we see Evgeni Malkin collect a puck below the end line, curl away from his defender, assess the situation, and then pass it back to the point. He then exchanges with Chris Kunitz in the slot as the puck is held at the point, letting the play develop. Malkin then gets open near the right faceoff dot for a one-timer. Had this puck been rushed by the player at the point or had Malkin not continued through the slot, this quality chance doesn’t get created.

Here the Penguins show why they are the most deadly team on the rush in the league. Rather than make a pass upon entering the zone, the puck carrier holds it until the defender steps out to challenge, leaving an open lane to the player attacking the net. From there, it’s a touch pass to for a shot that should have been converted had it been anyone else besides Tom Sestito.

This is the advantage of playing below the goal line. Kris Letang sends this puck behind the net for Nick Bonino to pick up. Bonino takes a quick peek out front before collecting this puck and he knows right where to go with it. The defenders are caught because they’re all staring at the puck. It’s a little unfortunate that the pass wasn’t better or the shooter was right-handed, but this play will result in a good chance more often than not.

Now let’s look at a team that is near the bottom in these types of plays: The Philadelphia Flyers.

The Flyers win the puck and then pass to the point to Mark Streit. Rather than take a second to see what options are available, Streit simply fires away. He could either pass it off to Shayne Ghostibere or reverse it to the forward coming out in support. Both would get around the defender in his face and offer better options.

A similar situation unfolds here. The puck comes back to the point and is mindlessly blasted away without a moment to consider better options. The Flyers recover the puck and then proceed to do it all again. The Flyers run one of the worst offensive schemes in the entire league, with a huge percentage of their shots originating on passes back to the point. 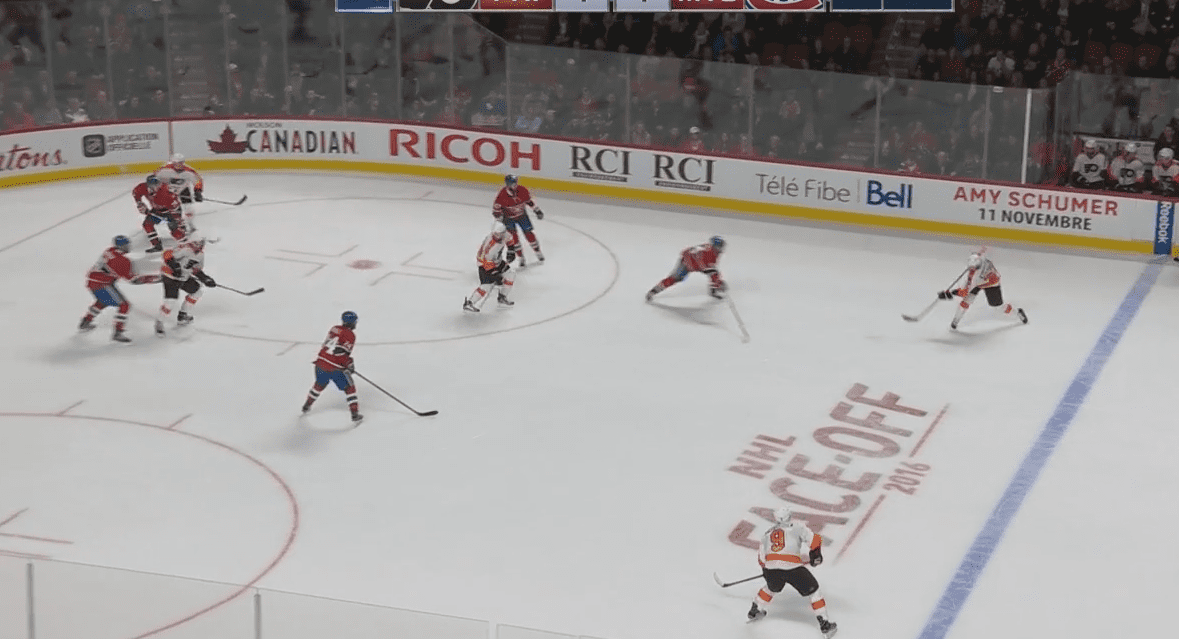 A better play in this first still from the previous clip would be to switch to the left defenseman (9PHI). That creates a better shot opportunity, allows for a pass inside to the Flyer in the right faceoff circle with inside position on opposition, or take the puck himself to the net for a closer shot. Had he played the pass inside and advanced on goal, the Flyers would have an advantageous situation and could isolate the defenseman the slot.

With how many games teams play and how little time there is to practice and scout your opponents except for the playoffs, something I wrote about here, it can be difficult to offer specific, detailed game plans night in and night out. Small changes like focusing on making that extra pass is something coaches can spend time on with the players and get the message across quickly – it’s not a new system that players have to learn, but rather prioritizing skills and decision-making ability on the ice. Teaching tactics and not systems is not only more economical given the lack of time available to teams, but it doesn’t box players into rigid play; they can be creative on the ice while keeping in mind a few, solid principles.

So, maybe the fans in the stands should have a little more patience and shout “Pass!” instead of “Shoot!” next time.