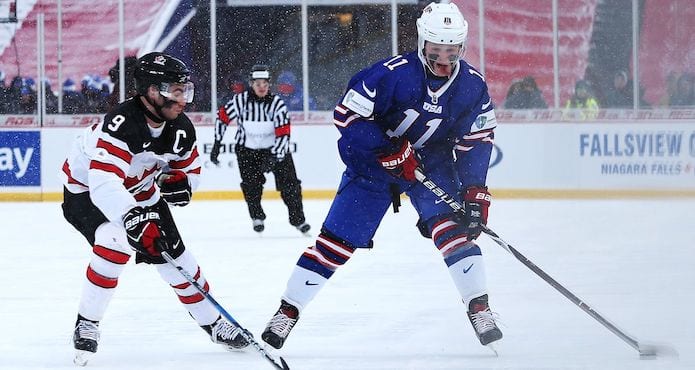 This is a special series of six posts published over the holidays to help coaches watch the skills and tactics that lead to Team Canada’s success (or lack thereof) at the 2019 World Junior Tournament.
Part 1

Hockey Canada has a strict code by which they organize their skill development, and it’s passed on to grassroots organizations from North Vancouver to St. Johns and everywhere in between. The first and foremost skill we should teaching at the minor hockey level?

Skating. Now, checking is number 5 on the list after stickhandling, passing, and shooting, but I still started this special series with checking instead of skating because to play at this level, being an excellent skater is a given. Some players are faster than others, but if a major junior hockey player’s skating is noticeably lagging behind their peer group during Team Canada’s selection camp, then it’s an easy release for the coaching and management staff.

Skating with the puck is one thing, but this year I’m going to pay special attention to how well defenders use their feet to get in the proper position when they don’t have the puck. This includes defensemen who get up (or don’t get up) in the play to maintain a tight gap when the puck comes back their way, and it includes both D-men and forwards who are agile and have quick enough feet in the defensive zone to stay between their man and the net.

It’s a skill you can work on at any level. One puck, two players – that’s all you need. Some of the most important action in Team Canada’s games will occur in the corners, the trenches, or the tough areas where goals aren’t scored, but where the offense begins.

Quick feet in the D-zone, watch for it!