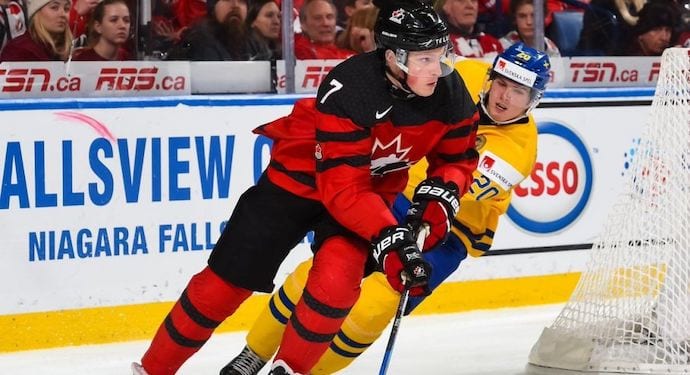 This is a special series of six posts published over the holidays to help coaches watch the skills and tactics that lead to Team Canada’s success (or lack thereof) at the 2019 World Junior Tournament.
Part 1
Part 2

Once the games have begun at the 2018 World Junior Tournament and the players settle in, the skills of each nation will really shine through. One area of focus for Team Canada in recent memory is the reliance on skilled, puck-handling defensemen. Seems like such a simple concept, right? Well, it wasn’t so long ago that big, slow defensemen could clutch and grab their way to a gold medal.

Those days are over. That’s not saying that it’s easy to just grab players who can pass the puck – at the World Junior Tournament, played by teenagers in front of thousands of people, there’s a lot at stake. It’s stressful. Imagine going back to retrieve a puck knowing that if you cough it up to a rampaging Russian forechecker with the ability to put it in your net in a wink then a million Canadians are going to boo you for the rest of eternity.

And it’s not just the defenseman’s job to break the puck out any more. Coaches complain about d-men who rim the puck around their boards, making their problem someone else’s problem, but that usually happens because there isn’t a viable alternative. So this year, I’m going to pay close attention to Team Canada’s close support on breakouts. It’s a long way to skate back to your own zone after spending time in the offensive zone having fun and racking up scoring chances, but that’s exactly how they’re going to have to play if they want to pull a gold medal over their heads.

This means they need 3 or 4 people back to the puck, short passes, low centremen who skate the puck out of trouble, and weak-side d activation.

Close support on breakouts, watch for it!