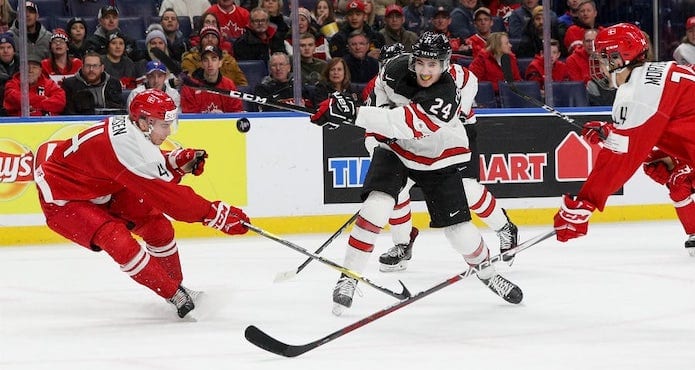 This is a special series of six posts published over the holidays to help coaches watch the skills and tactics that lead to Team Canada’s success (or lack thereof) at the 2019 World Junior Tournament.
Part 1
Part 2
Part 3

We come to part four of this series and I’ll admit it’s the first I’m genuinely curious about. Sure, I’m keen to watch for stick on puck forechecking, defending with the feet, and close support on breakouts, but I know these things are going to happen. I just don’t know how well or how obvious it will be.

But shooting the puck? Every coach has told their team to shoot the puck more. Rare is the player who makes the decision to shoot instead of pass to an open (or not open) teammate. It’s the culture of hockey, and it’s understandable. But it it’s also maddening.

Many junior hockey players trying to fit in with a team can be nervous about the perception that they’re trying to hoard the glory, so they over-pass and under-shoot. It’s a culture that’s complex, but maybe for your team it comes down to the fact that your players might not be confident in their shots. Pass it to a teammate, we’re more likely to score anyways.

The World Junior Tournament pits the best under 20 hockey players in the world against one another, so even though these players might have their radars tuned perfectly in their leagues back home, it’s a different story when you’re on a team of allstars all looking to contribute.

So this year I’ll be looking for situations in which players could have shot the puck and elected to pass, or vice versa, and the outcome of those decisions. Hopefully they think shoot first, pass second, and they create some second opportunities with higher percentage plays. Or maybe they chuck it around for 30 seconds before burying a back-door tap-in.