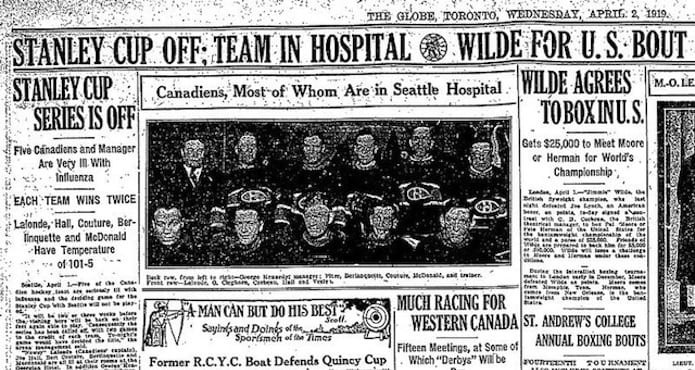 An inscription on the Stanley Cup reads, “1919; Montreal Canadians vs. Seattle Metropolitans”; the names of players conspicuously absent. The blank band on the Cup then reads “Series not completed.”

Seattle was competing for the Stanley Cup in 1919….

…and then the Spanish Flu hit.

It was just over 100 years ago, World War I was finally over and professional sports were starting to fill the normalcy void as soldiers returned home from the fighting, war-torn but eager to live life. But, they did not return just with a joie de vivre. Unbeknownst to them they returned transporting a deadly virus to their country, communities and family members that would wreak havoc on society, including the evolving sporting world.

Resisting cancellation due to the pandemic known as the Spanish Flu, professional hockey’s playoffs between the Pacific Coast Hockey Association and the new National Hockey League pushed on despite advice to the contrary. Of course, things were very different in 1919 with only a small number of professional teams in North America, revival leagues and ownerships and no players associations. Rinks themselves with artificial ice were also a costly phenomenon. Hockey, it could be argued would soon prove to be, the hardest hit of all major sports.

The Mets earned the right to square off with the Montreal Canadiens and the series after debate was set for Washington State. But, despite the valiant and excellence in play over series to earn the right to play for the Cup, and league organizers’ steadfast determination to continue despite a worldwide pandemic, the attempt for the first post-war Stanley cup failed miserably.

With the series deadlocked at two, after what was described as the ‘greatest game ever played” players like Newsy Lalonde, Jack McDonald, Dierdre “Cannonball” Pitre, Odie Leghorn, Hap Holmes, and Muzz Murray would have to relish in the attempt rather than any victory. The final was not played.

The final was also riddled in controversy. A star Seattle forward was removed from the series, unceremoniously, and was arrested for alleged draft-dodging, never to return to play for Seattle. Adding to the drama, disputes over rule differences and play format were debated endlessly. Each league (PCHA & NHL) played by a different rulebook and these rules alternated game to game. But, it wasn’t these logistical issues that ended the series. It was a virus (later identified as H1N1 A).

The final and deciding game was cancelled mere hours before play. Most of the Canadiens squad and even their manager Ted Kennedy were severely ill. Joe Hall, the Canadiens’ star defenceman, became so ill that he died soon after being hospitalized. And Hall, he was never the same, suffering from continued health effects passing away only a few years later.

So even if our memories are short, the Cup remembers the last time the game was played during a pandemic. What lessons is Stanley whispering?