Sprint Based Hockey: a Weekly Template 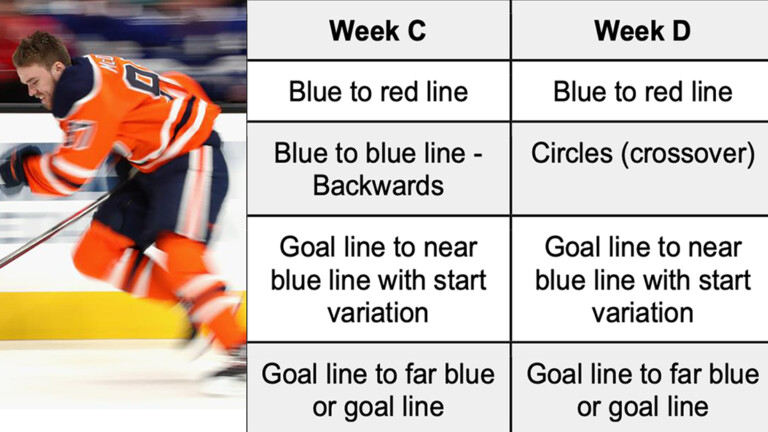 Wow! Did you see that play last night?!

It’s a weekday morning and two NHL diehard fans are discussing the huge play made last night. It’s been months since Colorado won the Cup and they’re ready for more NHL action.

In locker rooms and offices that evening, players and coaches will be breaking down the same play. Players will be mimicking the pass, stickwork, and shot. Coaches will be questioning each other, “How do we get our players that fast? Did you see how he came down the wing and went wide on the D so easily? He’s just so fast!”

Coaches, it is right there in front of us. Fast players make fast plays and fast plays are big plays.

As the world’s best are watched live and on TV this season, more and more coaches will want to know, “What would it look like if we tried to get our players that fast?”

In Part 1 of the Sprint Based Hockey Article Series, Sprint Based Hockey was introduced as a system that gives coaches what they want but do not know how to develop – faster players. Article 1 broke down the science of speed development and ways to incorporate sprints, after warm ups, into already existing practice plans.

To review, Sprint Based Hockey is a system that slightly modifies classic practice layouts to prioritize fast and fresh over slow and tired. It is best utilized by an organization that emphasizes short shifts and high intensity speeds during games.

Now that some coaches drank the Kool-aid and want to develop faster players, we turn to what a week of Sprint Based Hockey may look like.

To learn more about Chris’ principles behind Sprint Based Hockey, you may reach him at [email protected]. Follow him on Twitter @coachchriskerr.