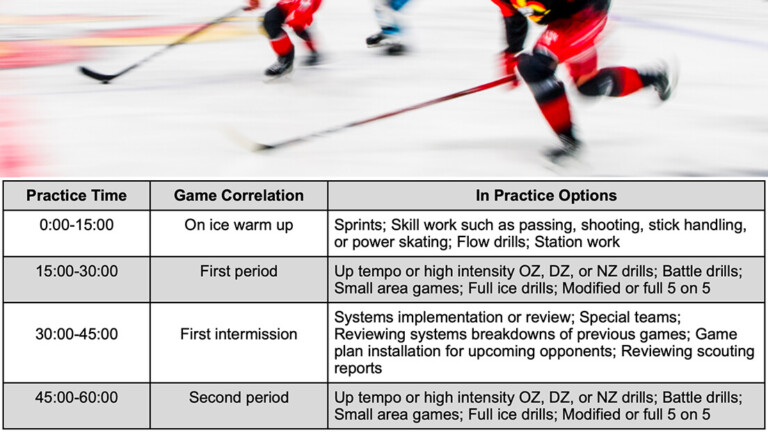 If you want fast players, develop their speed and do not slow them down with poorly implemented and executed practice plans.
5
(3)

It’s Friday Night. You have prepped the team all week for this game. This is the big one.

This week’s practices have been grueling with high intensity from the moment players step on the ice to the moment the Zamboni chases them off. Yesterday’s practice, Thursday’s, was light with barely any high intensity drills, so they should be ready to go.

As you walk down the tunnel you think back to the last few weeks of practice. Long, tough hitting battle drills and most nights ending with a 10 to 15 minute hard skate to get the legs ready.

What could possibly go wrong after weeks of practices that were grit filled, grindfests, resembling the movie Miracle? Isn’t that the way to make the toughest, best team come game day?

The above descriptions of tough, constant grinding during practices is a classic one. Coaches think constant hard work is the key to victory. And don’t get me wrong, it is absolutely a part of it. However, by reverse engineering the game of hockey and mimicking game demands in practice, you can skate off the ice having had the Perfect Hour of Hockey Practice.

Sprint Based Hockey is a system that slightly modifies classic practice layouts to prioritize fast and fresh over slow and tired. Hockey Coaches want fast players – but do not always know how to develop speed.

With ice time being valuable, and yet limited, every second counts. The Perfect Hour of Hockey Practice Template now takes the coach who trains speed and skill at the start of practice and offers a practice layout that mirrors what happens on game day. In essence, players get faster because they are not getting slower.

While the term ‘perfect’ is hard to achieve, I truly believe there is a perfect hour of hockey practice that when executed, prepares a team for the game like no other practice layout before it. A team that is prepared for game demands will execute systems and skills at high speeds.

The Perfect Hour Template takes into consideration everything a players body will go through on Game Day and lays it out into time based sections that allow for mental and physical adaptation.

If a practice is a constant, steady grind, a player may not actually know what 100% feels like. They may not be ready for the quick decisions made in a game, because practice intensities are lower than the demands of the game. Hockey is a short burst of high intensity game. But a practice that has over 20-25 minutes of constant grind won’t get you there.

With the above template in mind, we will now break down each time based section to understand why this Template truly is the Perfect Hour of Hockey Practice.

If you want fast players, develop their speed and do not slow them down with poorly implemented and executed practice plans . . .