Sprint Based Hockey: The Perfect Week of Hockey Practice 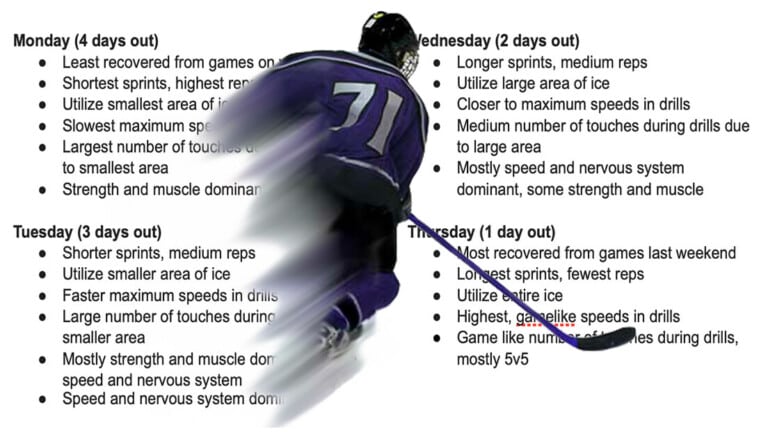 With only a few slight modifications to your current weekly practice plan, you can have a faster team.
5
(2)

“Do I Have to Change Everything?”

It’s a weekday evening. You just finished streaming In the Crease on ESPN+ and you keep replaying the game changing moments all fueled by breakaways and winning 50/50 races to the puck. Quickly you realize what’s missing from your team: more speed.

I have repeated it across all of my articles, but I am describing Sprint Based Hockey as a system. A system that slightly modifies classic practice layouts to prioritize fast and fresh over slow and tired.

A system is pretty difficult to write about in a 2,000 word article, so I’ve spread it out across the last three and will finish it up with article 4. I have introduced:

In the final instalment of my introduction to Sprint Based Hockey as a system, the Perfect Week of Hockey Practice will be described here. My goal is to convince coaches to follow a scientific and physiological approach to their weekly practice planning. And how by doing so, it will lead to improved speeds come game day.

Why will Sprint Based Hockey lead to improved speeds come game day? First, because speed will be trained and treated as a skill. And second, practices will be set up in a way that honors players’ physiology and nervous system. In turn, players will get faster, because coaches are not making them slower.

I believe that an organization that adopts Sprint Based Hockey will be developing players for the next level or the higher level of the one they are currently at.

Want Fast Players? It Starts and Ends on the Ice, With You

One of the best ways to make a team faster is by not slowing them down. You cannot have your foot on the gas and brake. And the main driver of any team is the on-ice coaches. You are the biggest stakeholders.

That is why I’ve taken the last two articles I’ve written to focus on practice layouts, structures, and templates. At the end of the day the key stakeholder to player speed, besides the player, is the Coach. The Head, the Assistants, the people on the ice multiple times throughout the week with the players, truly have the largest impact.

The Perfect Week of Hockey Practice should change and look different every week, because of travel, easier vs harder games, overtimes, and other scheduling fluctuations. But the goal with this article, and my last three, is to present scientific principles and templates for coaches to make their own.

Many coaches did not take kinesiology or exercise science courses during College or University. I think my articles fill in those gaps. Most Coaches already do everything I am describing, just perhaps the order is wrong such as full ice 5v5 days out from the game and only performing small area games the day before a game.

Remember, across a week of practices:

Each day will receive its own section and more detailed template, but here are outlines to allow you to see things as a bigger picture.

With only a few slight modifications to your current weekly practice plan, you can have a faster team . . .