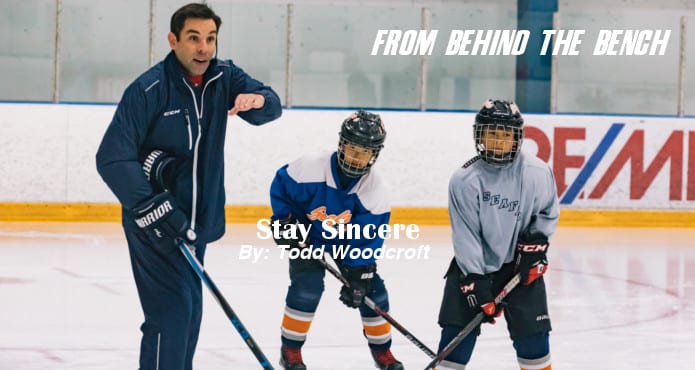 Todd Woodcroft is currently an assistant coach with the Winnipeg Jets after a long career climbing the ranks at home and abroad. In this instalment of FROM BEHIND THE BENCH, Woodcroft tells us how to break into the biz, what it’s like coming from a hockey family, and what’s next for the Winnipeg Jets.

I was very fortunate to have stayed in contact with people in my past. One of my coaches when I was younger was Jamie Kompon, who is also now with the Winnipeg Jets, he was in St. Louis working for the St. Louis Blues. He had told me that the Minnesota Wild were looking for a younger guy. At that point technology was sort of new to the NHL and they had a job as a video coach, which was basically analyzing other teams and pre scouting.

From there, I was able to stay in a good coaching network. And I’ve been really lucky to have been invited to different things. I was invited to Hockey Canada in 2004 to the men’s Worlds where we won gold — that staff had Mike Babcock, Tom Renney, Mike Pelino and Joel Quenneville.

I also took a year and went to the KHL and was assistant general manager and director of player personnel for the very first year of the KHL. I was in Minsk and it was fantastic, a great experience and I learned a ton. But I did miss the NHL.

I was invited to go to a few world championships, I was with Belarus’ men’s national team — the head coach of Belarus at that time was Glen Hanlon who’s been a huge influence on me, I was with him with the Washington Capitals as well (2005-06). Glen moved to Switzerland to coach their men’s national team and he asked me if I would come on as an assistant coach for him.

From there it just kind of steam rolled. I had some connections out in Sweden with their national team and they invited me to come on for the World Cup this year, and also for the World Championships in Germany where we did really well.

I’ve had a lot of luck, had a lot people who have cared about me. I’m the epitome of the guy who has had the great fortune to know some great people. And that’s what brought me to Winnipeg.

My dad was a goalie way back in the day, we always make the joke that he was a goalie before the head masks because he’s a bit of that crazy hockey guy. He’s the luckiest guy in the world because he gets to watch his three sons and follow all our careers.

My older brother Craig is a long time player, he played with the Canadian national team, minor leagues, and had a great career in Europe. And then he ended up coaching as well. This year he signed a contract to be a head coach in Geneva in the Swiss National League, which is one of the best leagues in the world.

I’m never comfortable as a coach because I’m always trying to get better and surround myself with people who are going to make me smarter; going to conferences like [the TeamSnap Hockey Coaches Conference] or the World Championships. Anything I have a responsibility for, I want to do it better than the next guy.

I’ve had that in me, first from my brothers. Craig is a very competitive guy and Jay is too and growing up we were competitive with each other. But also from the influences in my coaching career. From Jacques Lemaire, Mike Babcock, and Glen Hanlon. And now I’m so lucky every day to work with Paul Maurice and to see what he does to push me out of my comfort zone. I’m actually not allowed to be comfortable because I’m pushed every day to get out of it.

The most important thing I’ve learned is the power of networking. And sincere networking. Anybody can send an email and a resume, but you have to be genuine and sincere in how you network with people.

That’s how I broke into the NHL, I had a relationship with Jamie Kompon. It was a phone call and he knew somebody. It’s important to develop relationships and maintain them.

That sincerity has to be shown to your players. You can have a positive influence on players, even at the NHL level, but you have to show them that you care about them. And it has to be genuinely demonstrated every day by finding out that they are people too and knowing they have good days and bad days.

If you’re dealing with young players, the rink should be a positive place. She or he might have a bad day at school or had a fight with their family, but when they come to your rink where you’re going to be their coach, that should be a positive thing. And if you can genuinely care about them and know about their family, how school is going, what’s going on in their lives, I think that helps all coaches get better, and that will help players get better and teams get better.

Next for the Jets

The best thing with Winnipeg is how young we are. And young usually means a learning curve — in the NHL the learning curve is such a small window. Our guys are young guys getting 60 points, creating offence. The offence is there and I think as our players get older and more mature, fans of the Jets and fans of the league will see that we’re ready to push.

We were working from the day after we were out of the play offs — on development, rookie camp, training camp — working on everything to try and make our team better. If you’re not challenging yourself, you’re not going to get better.