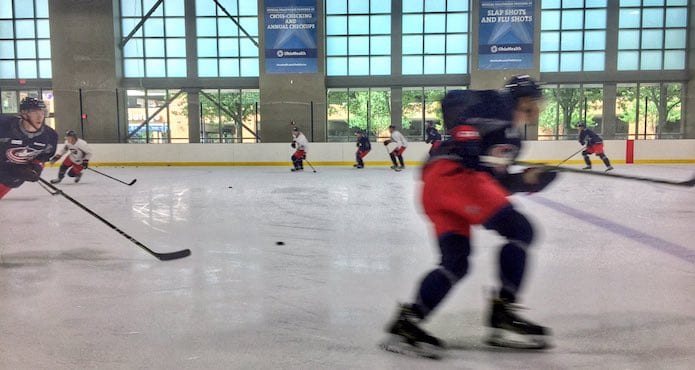 There are better ways to motivate your team.
5
(1)

If you’ve played hockey, you’ve probably been put through one.

Maybe your team wasn’t focused. Maybe they weren’t working hard enough. Maybe someone stepped out of line and broke a team rule.

Maybe the coach was just having a bad day.

Whatever the case, the bag skate is the act of skating a team to the point of exhaustion, without pucks.

The most famous type of a bag skate is a “Herbie.” It’s the famous skating you see in the movie ‘ Miracle’ after a lacklustre loss to Norway. Herb Brooks yells “again” and Craig Patrick blows the whistle to start a Herbie.

Perhaps this was an effective tool for a coach back in 1980. But now? Well it’s old school and we’ve come up with better ways to teach players a lesson.

Why does a coach do a bag skate?

The bag skate has traditionally been used to punish a team after a terrible performance or grossly breaking team rules. Other times coaches do a mini-bag skate to get their team’s attention when they are having a terrible practice.

Taking a quick jog back memory lane… When I was in high school I was asked to come practice with the local junior team. Before the practice, I am dressed and waiting by the door for the Zamboni to finish up while there was some commotion with a few players pacing back and forth. They were freaking out because the assistant coach had placed a puck bucket with a case of beer at the centre ice dot.

What I quickly pieced together was the team was very concerned they were about to be bag skated due to the fact one of the players was seen in a gas station buying beer under-aged with a fake ID by the team’s assistant coach.

Fortunately for me, the assistant coach was playing a prank and sending a message softly to the team. It would have been one heck of a way to be introduced to that team.

There are better ways to motivate your team . . .