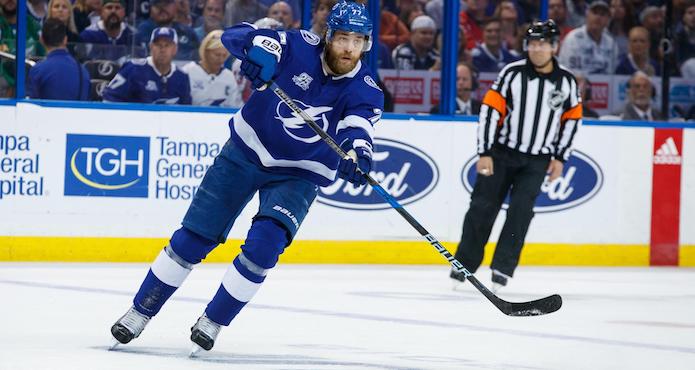 View all posts
Young defencemen can learn a lot from how he plays.
0
(0)

Recently I conducted a remote coaching session with a 15-year-old aspiring NCAA Division 1 player. This young athlete considered herself a “stay-at-home” defenceman and wanted to expand her game in order to gain a bigger role on her current team and be a more attractive prospect for college recruiters.

She was surprised to learn that to be an effective two-way, top-pair D, it is not necessary to lead the rush or to attack the net individually on each shift. As I explained, the difference between “traditional” and “modern” defencemen are more subtle than one would initially suspect.

For young defencemen looking to add a new dimension to their games, there are few better inspirations than Tampa Bay’s Victor Hedman, the 2020 Stanley Cup champion and Conn Smythe Trophy winner as playoff MVP.

During the Cup Final Hedman led the Lightning in time on ice, averaging 25 minutes per game in all situations . The staggering workload meant that he needed to move efficiently in order to not run out of gas late in the game.

However one moment during which he does not ration his energy is when Tampa Bay is breaking out.

In either case the savvy Swede is quick to identify that there is a race to be won and moves his feet to grab pole position. Not only does this sense of urgency help Tampa move the puck out of the defensive zone as soon as possible, but it also helps the towering 6-foot-6 blueliner build speed and join the rush as a fourth forward.

2. In the neutral zone: Attach to the speed threat

As an offensively-minded defenceman, Hedman often finds himself caught in tricky spots up-ice as Tampa Bay fights for possession in the opponent’s half.

However rather than sprint back to the safety of the red line at the first sight of trouble, he instead quickly identifies the opposing team’s biggest offensive threat and close on that player.