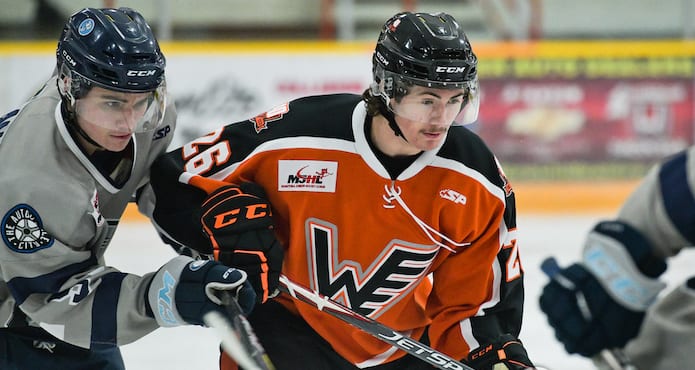 Hard work is required to get the puck, then skill takes over.
3
(1)

This isn’t hard. Except when it is.

It isn’t complicated. Except when it is.

For coaches, teaching simple offensive zone principles like the forecheck or cycle isn’t difficult — just get there first and get the puck, what’s so hard about that? Mentally, it’s not. Physically winning a race and putting your body in harm’s way? From a player’s perspective, it is hard. It demands work, and there’s no substitute for work ethic.

The game is played at its best when we keep it simple, when we design tactics that are easy to understand and leverage the unique skills of individual players. Aggressive hockey players who are determined to win races are rewarded with puck possession.

That’s where the skill takes over.

So in essence, the harder a player works, the easier the game becomes. See? It’s not complicated at all.

People say you can’t coach offence. I don’t believe that.

What I do believe in is a consistent set of plays and options that players can utilize in the offensive zone. In other words, free-spirited hockey between teammates who are on the same page in any given zone, in this case the offensive zone. Being over-complicated in a near position-less offensive zone scheme results in a lot of sizzle, but not a lot of steak.

So let’s stick to the basics for now. Once you’ve got a foundation in place, then you can branch off into strange new worlds.

And there’s nothing more basic than your forecheck, so let’s focus on getting the puck back before anything else with the help of a few examples from my team, the Winkler Flyers.

Get there first on the forecheck

A couple weeks ago, I wrote about the situations in which you might need to dump the puck in the zone. I’ve got certain advanced analytics I like, and some I don’t — one I fully believe in is the advantages to carrying the puck in the zone. But since the other team might not let you do that, it’s good to have a recovery plan.

However, whether you’re running a 2-1-2 or a 1-2-2 or some other fancy forecheck, it doesn’t matter if you don’t have players who can win races and get to the puck first.

Win your races, we say all the time. Get to the puck first and then skill can take over. But that skill has no chance of seeing the bright lights unless you’ve got the work ethic to take you there.

Watch the weak-side forward, Ian Tookenay, pick off the goalie’s pass behind the net. He gets to the puck first, and then it’s game on.

The next one is a bit of a fortunate bounce, but you create your own bounces with speed and aggression.

Griffin Leonard places the puck into a good space, nice and slow, and the defenceman behind the net is forced to make a play under extreme duress as two large mammals come bearing down on him. The forecheckers are working as hard as they can, and even if they don’t have perfect habits all the time (look at the sticks flailing in the air), the result is still in their favour because of the process.

Hard work is required to get the puck, then skill takes over . . .