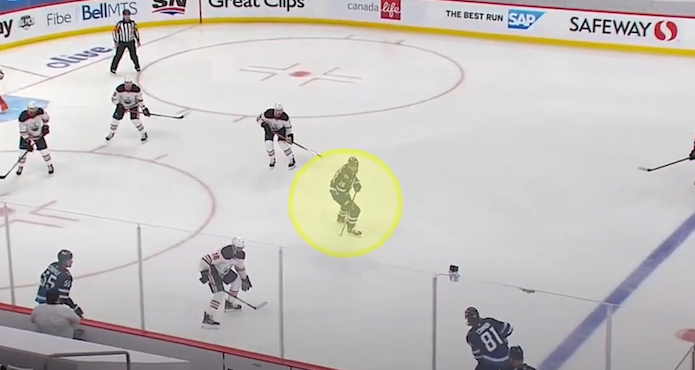 After just three wins in their final 12 regular season games, the Winnipeg Jets swept the Edmonton Oilers in the first round of the playoffs. Who would have seen that coming?

Like Jets head coach Paul Maurice said: “We were a good regular-season team, but hadn’t switched gears into what the playoffs were going to be like. That losing streak gave us an opportunity to focus as a group, to become more of a playoff-style team, and I felt we did that.”

Looking at this right now, he was dead on. Let’s take a look on how the Winnipeg Jets were able to capitalize in the offensive zone against the Edmonton Oilers.

More and more teams have been using this option in recent years.

Sending one of your forwards high in the zone can create a lot of confusion. Sometimes it is the puck carrier who is skating along the wall, making the pass to D1, D1 then moves it to D2 and the puck carrier follows their route and stops in between the defenceman and receives the puck.

The other option is a low-to-high pass and the high forward pops out between the defencemen, ready to receive the pass. This option creates confusion because it forces the defending team to stretch their coverage, or allows the offence player to get shots from the point with lots of traffic in front.

I could have provided way more video, but one thing I have noticed with the Jets is how hungry they are when they lose the draw. Their wingers are ready to jump on the puck and force a turnover. If not, they have a set play with bodies going to the net.

Edmonton defencemen did not handle the pressure well from the wingers on the faceoff.

I don’t have the exact stats with me, but looking at the four games, I can say that over 40% of the shots came from a low-to-high play.

The Jets were able to use and activate their D a lot throughout the series. Even if the Oilers did an ok job at blocking shots, a lot of them still found a way through and created a lot of front net battles. The other options that we see on the video are D to D plays. It was usually wide open, and the Jets were spreading the offensive zone, making it even harder for the Edmonton forwards to create turnovers.

Being strong, physical, and big is a huge asset for the Jets. They are a playoff team and love playing down low. They had a lot of success against the defencemen of the Oilers because they played below the goal line and change the point of attack — by carrying the puck, passing below the goal line or doing a tight turn and coming back. After controlling the puck below the goal line, they had plenty of options available — bank off the wall to the D, pass to F3 high circle, attacking the net and more.

Not typically thought of when think about the offensive zone, but it’s important to notice how many times the Jets used the defencemen in front as a screen. The other thing to look at is when they are close together, they are working together in a small triangle and they all staying open as an option to make a quick play towards the net.

One of the things that the Oilers struggled with was how much space they gave up in the defensive zone. The Jets were able to take advantage of this and created a lot of seam plays for scoring chances. For me, it was a game changer, and even if they did not score a lot of goals from this, they were a threat every time.

Similar to changing point of attack, the Jets took advantage of their size and speed to pressure the puck carrier a lot. Take a look at how many times the Oilers just giveaway the puck for no reason, struggle to make a pass, or even might have been scared a bit by the pressure the Jets applied.