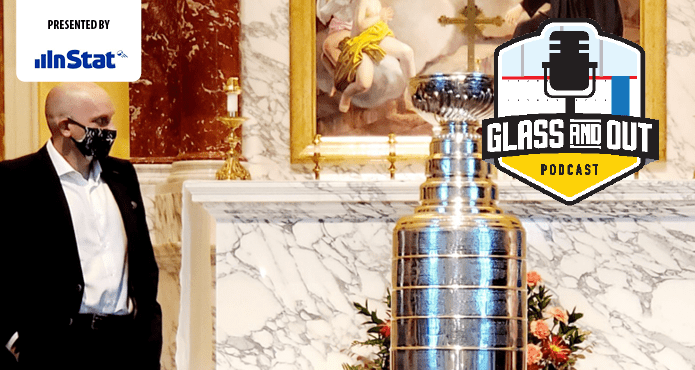 This week’s podcast is sponsored by InStat.

Well, the NHL pulled it off. Under the unprecedented circumstances of a global pandemic, the league was able to fully complete four rounds of the Stanley Cup playoffs within two bubbles and no positive tests of COVID-19. Congratulations to them and the Tampa Bay Lightning on capturing a historic Stanley Cup championship.

We’re joined today by a member of the Lighting coaching staff and friend of the site, assistant coach Derek Lalonde.

Lalonde’s first two seasons in the NHL have been eventful to say the least. The last time he joined the podcast, Tampa was fresh off a disastrous first round sweep at the hands of the Columbus Blue Jackets. He now joins us just over two weeks after the Bolts captured their second championship in franchise history, and one that could definitely be put in the “hardest Cup runs in NHL history” conversation.

Lalonde’s journey to the NHL took a total of 23 years working his way through the NCAA, USHL, ECHL, and AHL.

After 16 season as an assistant in NCAA Div 3 and Div 1 hockey, he got his first opportunity as a head coach and general manager came with the USHL’s Green Bay Gamblers. During the 2011-2012 season, he guided the Gamblers to the organization’s fourth Clark Cup and USHL Championship, and was named the USHL Coach of the Year in the process. Ironically, the Gamblers’ previous USHL championship had occurred in 2010 under the guidance of a coach named Jon Cooper.

Following three seasons in Green Bay, Lalonde made the jump to the Toledo Walleye of the ECHL. In his first season, he led the Walleyes to a regular season championship and again, was named Coach of the Year. His next move would see him graduate to the American League with the Iowa Wild, where he’d spend two season as an assistant before joining the Lightning.

Today, we’ll discuss how Lalonde has been celebrating his first Stanley Cup, the challenges of playing in a bubble, and Tampa Bay’s secret to rebounding from a first round sweep only a year ago.