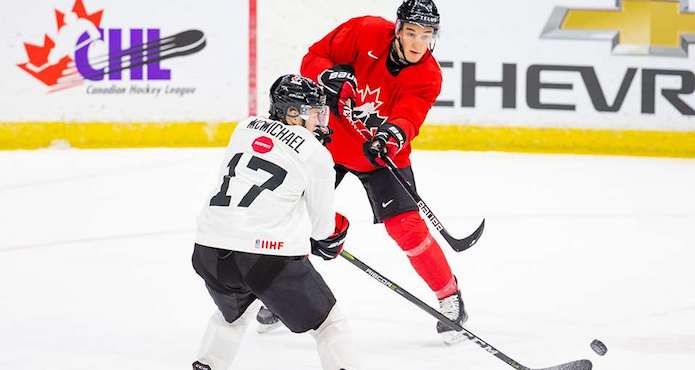 A couple of weeks ago, for the first time in weeks, we were able to watch some hockey. And while we didn’t have much to watch, we were lucky enough to get a glimpse of Team Canada’s training camp in Red Deer.

I’ve decided to break down the power play of both Red and White teams from Canada’s inter-squad games and try to see if there are some earlier characteristics that took place in Red Deer, that we might see at the actual World Junior tournament in Edmonton.

Nothing to note here, except on the losing side for Team Red. Take a look at the forwards and how hard they hunt the puck. They are ready to go on both sides, win or lose.

The biggest difference for Team White was they tried to attack right from the face-off. The importance of attacking the penalty kill in the first eight seconds after winning the draw could be crucial at the World Juniors.

Another thing to notice is when Team Red unit is under pressure by the penalty killers. They use the back of the net a ton. Not only do they make passes below the goal line, but they carry the puck there to release the pressure. We can see Team Red creating chances from there.