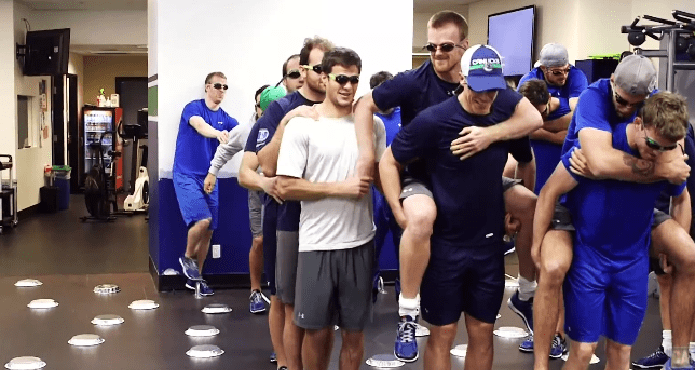 Oh great, thanks! Article complete, let’s go for a beer!

… but seriously, why is teambuilding so important for hockey teams all the way from university through junior and into peewee and atom? It’s an area of training camp in which I’ve admittedly never been terribly strong. Sure, I can run an activity or put a couple teams together off-ice to engage in some sort of fun challenge, but I’m guilty of leaning more towards systems and introducing on-ice tactics early on.

That’s why I wanted to write this article. I like to make life difficult for myself. I mean, I know teambuilding is important, you know it’s important, but let’s devote some brain power to discover why it’s important. Maybe then we (I) will get better at implementing it.

1. You Have to See These People Every Day


When you walk into your team’s dressing room, is your first stop your office or one of your player’s stalls? Do you revert to watching video and tweaking your powerplay or do you spend time getting to know your players?

That’s a coach’s perspective, what about the players? Day in and day out is much less of a grind when you’re doing so beside friends rather than mere teammates. Teambuilding at the start of the year breaks down barriers and puts everyone at the same level off the ice. They’re just people during teambuilding, who plays on the powerplay or the first pairing means nothing when you’re doing trust falls.

2. The Value of Comfort

We talk all the time on the ol’ blog about the importance of comfortable hockey players. It’s a fine line – we don’t want our players to be so comfortable that they’re not pushing to improve – but we do want them to be comfortable in the attempt.

A player who’s accepted by his or her peers for better or worse won’t worry about how they’re perceived in the social hierarchy of the team.

Think about it – will a naturally gifted, creative player be willing to showcase their skill in practice if they’re worried about being stuck with the “hero” label? It’s one of the dumbest aspects in hockey; that trying too hard is a negative. It’s ridiculous, but it’s true.

I’m sure some of the ex-pro players out there can agree that when you reach that level, a lot of your teambuilding occurred off the ice. You know what I’m talking about. If you can belly up to a bar for hours on end next to a teammate just like you spend an entire season in the stall next to them, chances are you’re going to form a bond.

The simplest analogy I can think of on the ice is blocking shots. If you’ve seen your goalie in some … uh, less than ideal circumstances, say after one too many lemonades, then you’ll probably develop a protective instinct, especially if you’re the one who poured him into a cab at the end of the night.

So what have we learned? That Kelvin is encouraging you to take your junior hockey team out for a night on the town?

Teambuilding creates accountability, it fosters comfort, and it simply makes the day to day grind of the hockey season a lot more fun.

And that’s an environment we can all get behind.