The Message Hockey Needs to Hear 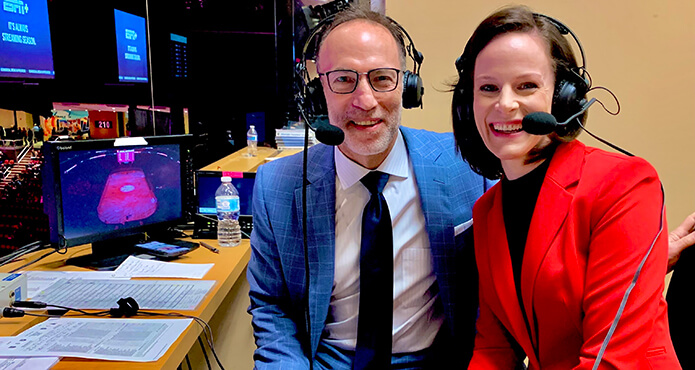 It was a privilege for The Coaches Site to provide Leah a platform to share her story.
5
(1)

TCS Live, our flagship hockey coaches conference, was set to kick off on June 15th at the University of Michigan after a two-year hiatus. The to-do list exceeded the runway available to myself and our Coaches Site team before a delegation of over 300 coaches from around the world joined us in Ann Arbor.

And then I received a text message. In hindsight, it was one of the most important text messages I had ever received.

It was from Leah Hextall.

We had done some work with Leah in the past at our Virtual Hockey Summit (she was part of a panel of 5 trailblazing women discussing the pathways for females in hockey), but I wouldn’t say we were particularly close or that we routinely checked in with each other.

She asked if we could talk.

We arranged to connect on a call the next day.

I had no idea what to expect.

Following some initial small talk, Leah asked if we had any room for her to speak at the conference. She had something she wanted to get off her chest.

We didn’t. In fact, we already had too many speakers and were trying to sort out how to squeeze all of them into the agenda. But I asked if she could elaborate. What she shared caught me totally off guard.

As soon as she started speaking, I popped out into my backyard and started pacing as Leah described her first season calling NHL games for ESPN. If you’re not familiar with Leah’s story, last season she became the first female to do play-by-play on NHL broadcasts full time. It should have been the most exciting year of her professional life. It was an opportunity for everyone in our game to celebrate a huge milestone for gender inclusiveness.

Except it wasn’t. And many people didn’t celebrate. 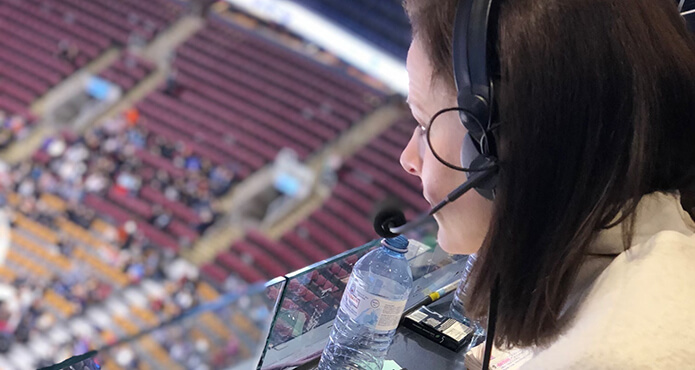 I’m not naïve to the fact that social media enables people to hide behind keyboards and hurl insults anonymously, like cowards. But hearing Leah describe the DMs she received (and in some cases emails directly to her inbox), presumably all from men, left me frustrated and angry.

I told her I would discuss the opportunity to speak at the conference with our staff and get back to her. However, after letting her words sink in, I concluded that as an organization, we were obligated to provide Leah a platform to share her story. In fact, it was a privilege.

You see, I founded The Coaches Site with the belief that providing hockey’s top coaches, thought leaders and performance experts a vehicle to share their experience and insights with a global audience of coaches would result in young players enjoying an enhanced development opportunity and sporting culture.

And while we have been blessed to work with many of the top coaches and leaders in our sport, I was convinced that Leah’s talk had the potential to make the most profound and positive impact of any presentation we’ve had at the conference.

I texted her back shortly after our call ended and said, “we should do it!”

While I was flattered that Leah chose our stage to share her story, I was also aware of the scrutiny she was likely bringing upon herself. If there is one thing you don’t do in hockey, it’s speak out. Or rock the boat. Or challenge the status quo.

It wasn’t lost on me how much courage it was going to take to be completely vulnerable in a room full of mostly men. Let alone have the video of her talk shared with the entire hockey community and sports world at large.

But the day came, and I watched as Leah confidently walked on stage. I was unsure how our audience would react, but I trusted her words would resonate with them. When she finished, they gave her a standing ovation.

I encourage you to watch Leah’s presentation for yourself. In it, she describes her life as a child growing up in a hockey family, the passion she developed for the game, her early career working in media, the experience of losing her job, the people and mentors who helped her along the way, and finally, the process of discovering her calling in play-by-play and the series of events that led to her being hired by ESPN. 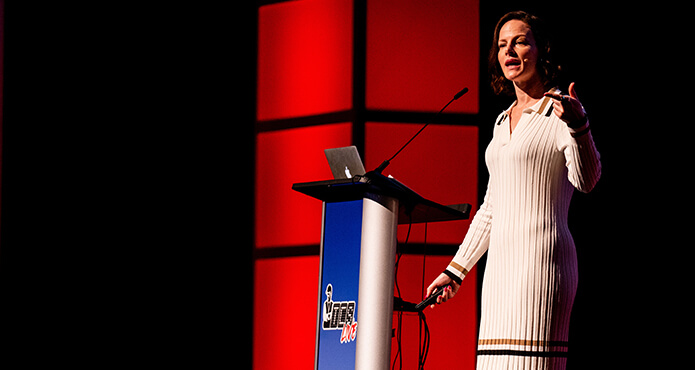 Leah’s story is inspiring on its own. She didn’t need to divulge the nasty messages she received. But I sense she recognized, and this is simply my own intuition, that if we want to see a culture shift in our sport, that men need to understand the reality, and hear the firsthand experiences of being a woman in a male dominated industry.

Not only do we need to provide women the experience to acquire the skills that can lead towards a career in hockey, but we also need to recognize them and treat them as equals.

I urge you to watch the video and share it within your network. The video is free and doesn’t require a membership to The Coaches Site to view it. It’s important to all of us at TCS that the entire hockey community gets to see it.

Based on the messages she received last season I can only assume that more people, again I anticipate that most of them will be male, will be motivated to try and knock her down again. Good luck. I’ve gotten to know Leah through this experience, and I can tell you she is as gritty and tough a person as you’ll meet (and it has nothing to do with her last name).

Leah’s a fighter and embodies the characteristics we naturally associate with our game.

I’m so proud she trusted us and I have so much respect for her. Thank you Leah!

Since Leah’s talk at TCS Live, I’ve done a lot of reflecting. It made me confront my own ignorance and entitlement in a game where I have always been one of the boys. I finally asked myself some tough questions: is a gender exclusive culture a healthy environment to grow up in? Is it preparing young men for the challenges and temptations that will surely be presented to them long after the game passes them by?

It led me to one definitive conclusion. For our game to become more inclusive – and I’m not just talking on an org chart – we need to have our finger on the pulse of how our culture makes people feel when they go to work. We need to be invested in our people. We need to have real conversations. We can’t simply put people in a role and assume that by providing them the opportunity that our job as a leader is complete.

There have been a number of females and minorities hired into the NHL and professional hockey this off-season. It’s been incredibly encouraging, and I sense there will be a trickle-down effect to the grassroots levels. But the measuring stick can’t be the job itself. It needs to be how comfortable and accepted these people are made to feel.

The Coaches Site was created to help coaches and our game evolve. In some cases, it’s the evolution of the power play into a 1-3-1 set up. In other cases, it’s skill development.

In this case, it’s about evolving how we aspire to make people feel. Opening the door is one thing, but we need to ensure that what’s on the other side of that door is a culture that doesn’t require you to be one of the boys to fit in.

If you’re reading this, it likely means you are in a position to be part of the solution. I would love to hear your thoughts on Leah’s talk and any feedback on how we can continue to make progress. Reach out on social media, we’re @TheCoachesSite.

Best of luck to all the coaches in our TCS community as we get set for the coming season. Let’s make it the best one yet!