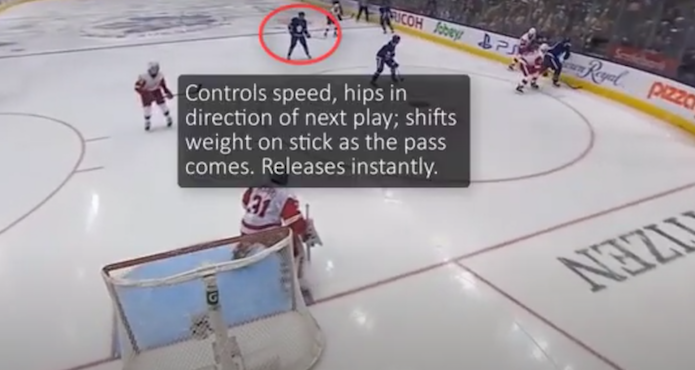 As players rise through the ranks of hockey, the opposition gives them less and less time to think while in possession of the puck. Defenders pressure faster, limit space with angling techniques, and remove outlets through tight coverage and defensive systems.

To continue creating a high volume of scoring chances, attackers have to simultaneously limit their puck touches and make the most of them. The best way to accomplish both of those goals is to master puck receptions.

An effective catch not only gives players complete control over the puck, but also eliminates the need for extra movements; it feeds directly into the next play and helps the attack rapidly grow an advantage over the defence.

In order to maximize their first touch, players have to do more than stop the puck on their stick; they have to:

To better understand each of those abilities, let’s break them down.

1. Finding a pocket of space and exploiting it

The space between opponents consistently expands and shrinks on the ice. Players have to read the openings to give favourable pass options to teammates.

That means not getting too close and congesting the area, but also not sprinting so far away that the pass has to move through multiple defensive layers (unless there is a unique breakaway opportunity). And it means controlling skating speed. To avoid being checked or angled off by defenders, players should arrive in a pocket of space at the right time or as the puck carrier becomes ready to pass.

Off-puck attackers should also give the carrier more time and multiple opportunities to connect with them. They can do so by controlling their momentum, but also by choosing the right route of approach, or one that has them slash through space and not skate directly at the carrier. By coming from underneath the puck at an angle or parallel to the carrier, the passing window expands.

Managing the receiving space is also important. Players don’t want to be stuck along the wall with an opponent on their back after stopping the puck on their blade. To prevent that, they have to scan the ice for defenders and obstacles, so that they can distance themselves from them, and find escape routes to get away quickly.

2. Setting up the next play

As much as possible, players have to reduce the time between the pass reception and their next play. To speed up their execution, they have to set up their feet, align their body, and position their stick to catch the puck in the starting position of that next play.

Here are a few examples of efficient catches.