It’s Time to Talk to Your Players: 3 December Goals for Hockey Coaches 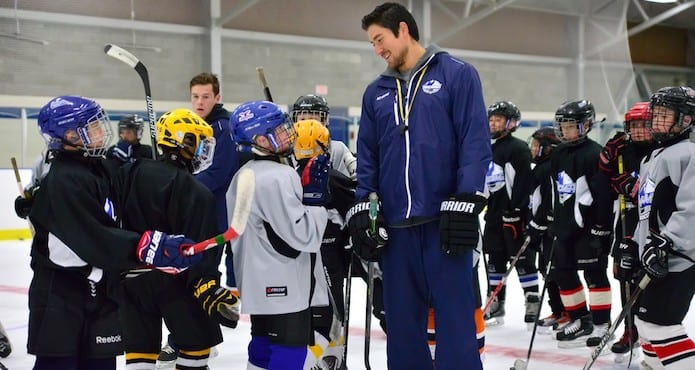 ‘Tis the season to reflect on the unofficial first half of your season. What’s working, what’s not working, and how can you capitalize upon both sides of the coin moving forward into the new year? A lot of coaches at this point in are prone to griping about underwhelming performances from their players, but it’s important to remember that, like a minor hockey player, you can only control what you can control.

One thing completely within your power is how you communicate with your players, your staff, and anyone else who comes in contact with your team. Instead of dwelling on a player who’s not living up to their potential (potential that you created, and thus not really their fault), work with that player on their game moving forward.

The best way to do that? Communication. Talking. Relinquish your iron grip on the whistle, let someone else run a few drills, and use the time to pull aside your players, one by one in the month to come, and learn more about them and how they process the game.

1. Ask About What’s Happening Off the Ice

Hockey players are human beings. Maybe one of your players has been skating with rubber boots on for a few weeks for a good reason. Maybe things aren’t so peachy-keen at home. Maybe they’re not sleeping. Or maybe their parents are giving them every advantage possible and they’re taking it for granted and they’re just lazy. Both are likely scenarios I’ve seen multiple times. You won’t know if you don’t ask. Kids don’t have to divulge everything that’s going on in their personal lives, but it is your duty to try to support them in any way you can. Often the only thing you need to do is listen.

2. Circle Back to Teambuilding

One of the most important elements of minor hockey is the chance for kids to meet new people, work with a team, and develop social skills on and off the ice. At this point in the season you’re inevitably going to have players who stick with their close friends, their small groups. There’s nothing wrong with that, but just because they’ve made one new connection doesn’t mean they ought to stop there. Surprise your group by taking a day off practice to go play lazer-tag, or eat some pizza and watch a hockey game.

You can’t be everywhere at once. We’re hockey coaches first and foremost, and whether you spend every day with your team at the university or professional level or only a few hours a week at the minor hockey level, you’ve got a spectacular opportunity to make a profound impact. Ask your players what they think they’re good at. Shooting the puck? Skating? Defending? Rebound control? You might be surprised, for one, but if nothing else these questions exist on the common ground between coaches and players. It’s our language. Start the conversation.

Once the holidays are over your season is going to fly by in a heartbeat. You might not have time to have these conversations later – the end of the season is much too late to foster meaningful relationships. If you can tweak a player’s internal rationale and encourage them to work on some aspect of their life, either on the ice, at home, or in the classroom, then you’re empowering them to take their game to the next level in the new year and in the drive for the playoffs.