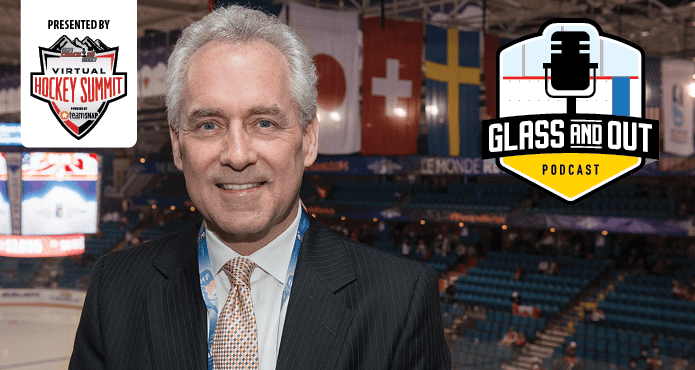 Welcome to the fourth season of the Glass and Out Podcast. We hope you had a safe and productive summer. Although we remain in uncertain times, we hope to continue to provide a resource for anyone involved in the game to learn from and stay up to date in the latest happenings of the hockey world as we head into a what is sure to be a season like no other.

We kick things off with a man who may have just been they busiest person in hockey this past summer, Hockey Canada Chief Executive Officer Tom Renney.

Renney, like a lot of executives and leaders, has been navigating uncharted waters during the COVID-19 pandemic. The possibility and aftermath of a cancelled season are likely concepts that he never thought he’d have to contemplate. As a hockey lifer, he can certainly relate to the range of emotions so many have been feeling during these times.

The Cranbrook, BC native has coached at just about every level over his more than 40 years involved in the game. His resume includes two WHL championships and a 1992 Memorial Cup with the Kamloops Blazers, as well as four NHL stops with the Vancouver Canucks, New York Rangers, Edmonton Oilers, and Detroit Red Wings.

Renney has also spent much of his career serving Hockey Canada at various roles (coach, team manager, CEO, president). That includes time at the World Junior Championships, World Championships, Spengler Cups, and Olympic Games, which includes a silver medal at the 1994 Winter Olympics.

Today, he oversees the growth and development of the game in Canada as Hockey Canada’s Chief Executive Officer. That makes him one of the key influencers in the hockey world.

In this week’s podcast, we’ll hear how Hockey Canada plans to approach the upcoming season, his thoughts on the overall direction of the game globally, and about his journey to becoming an influential voice in hockey.