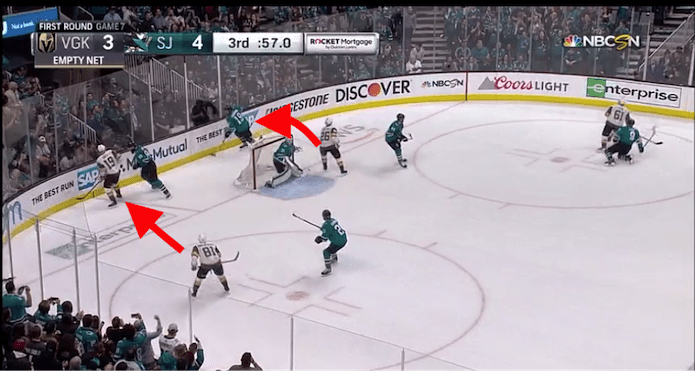 I continue to have no idea why teams pull their goalies with more than a minute to play. Makes zero sense.

It’s always quite fascinating to me to see the differences of opinion on what the optimal time to pull the goalie is. Brian Hedger, an NHL reporter, has seen hundreds of NHL games from the press box. His opinion on timing flies in the face of every mathematical algorithm and study going back to the 1970’s.

But without beating a dead horse and telling other intelligent hockey coaches when to add an extra attacker while trailing in a game, I wanted to follow-up on the first part of Hedger’s question.

As coaches, it’s incredibly easy to focus on the 6 on 5 faceoff plays in the offensive zone while we work with our teams on empty net scenarios. Without looking into it too much, I think it’d be fair to say that a lot of the times we’re emptying our own net it’s with an O-zone draw and, if we’re lucky, right after a timeout.

If you’re like me you’ve probably spent quite a bit of time on those faceoff plays and made sure that your players knew how to execute. But when doing that, we’re really missing the forest for the trees.

Faceoffs are, at best, a 50/50 battle (yes there’s variances in ability, handedness, etc. to take into account). The variables after even a clean win are in the dozens. Likely, multiple passes need to be made, players have to be in the correct spots and, oh yeah, someone still has to shoot the puck past a guy with enormous pads on.

So with all of that said, what does adding an 11th skater to an already crowded surface really do to help your team increase the opportunity to score and, more importantly, what can we do to help facilitate buy-in with our players?

As you’d learn on Sesame Street (or Sesame Park for the Canadians), 6 is more than 5. This fact is without a doubt the most important AND overlooked fact by us as coaches. Sometimes, we get so wrapped up in using the numerical advantage to free up a shooter that we forget about all of the variables that go into those set plays and ways to get that player the puck.

Using the numerical advantages that exist in the offensive zone is where we should be focusing that brain power. There are three guidelines that I like to live by when working with a 6 on 5. 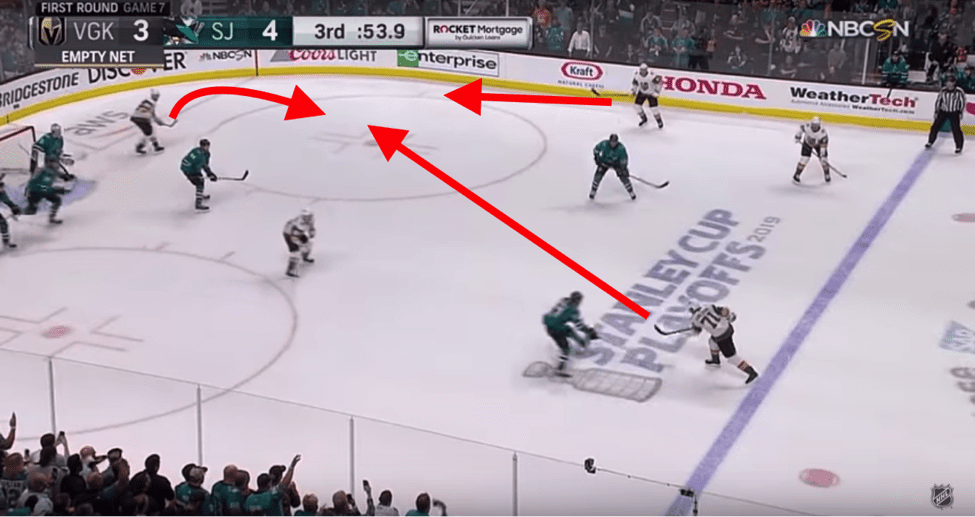 Let’s take a look at a sequence from that funky Game 7 between San Jose and Vegas that follows those guidelines after a faceoff play didn’t lead directly to a goal.

First, after the puck vacated the zone, Reilly Smith chips it in deep and is the first man on the puck. You’ll notice, though, that both Paul Statsny and Jonathan Marchessault come below the hashmarks to help Smith, thus shrinking the zone in case Smith turns the puck over. 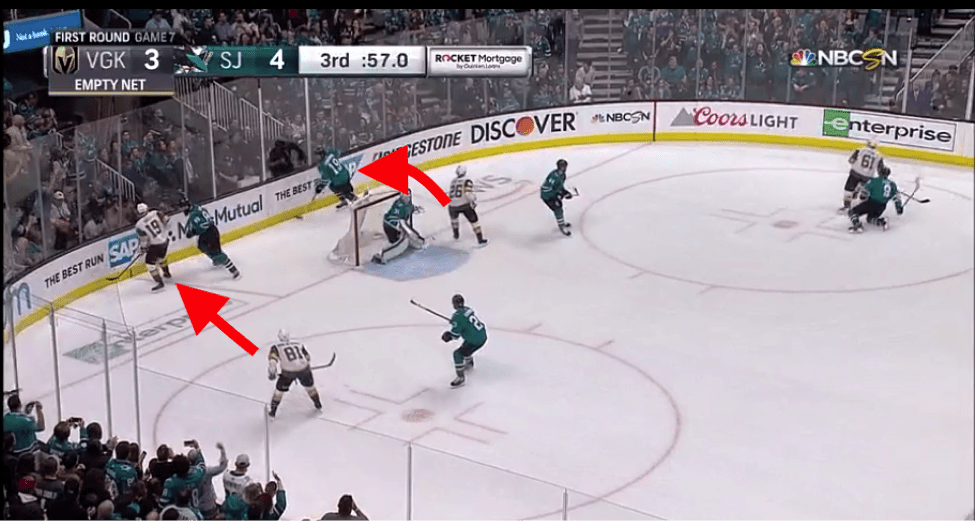 Smith, in fact, DOES lose the puck to Brent Burns and Joe Thornton. However, despite the possession change, Marchessault’s and Stastny’s positioning makes the only reasonable play a hoist that the Sharks hope gets out of the zone. If it gets out, it’s likely either a footrace for a loose puck or an icing call. Despite a lost puck, Vegas has used their numerical edge well.

The hoist play in this game was unsuccessful. The reason for that? William Karlsson, who is not a defenseman, knows that he can’t bail out of the zone. With about 50 seconds left, anything out of the zone that requires a regroup is going to cost his team at minimum 15 valuable seconds.

He does his best Joel Embiid impression and keeps the puck alive. More importantly though, Karlsson puts the puck into an area where the Golden Knights can continue to use their numerical advantage rather than just whipping a prayer on net. That allows Vegas to to continue to attack with numbers for their best chance to score.

All of that happens in about a span of :09. Here’s the full play:

Creating guidelines for your players late in hockey games is great. But that’s not specifically why Vegas was able to make enough happen to score. The foundation for each of those guidelines comes in practices and it has a lot to do with our normal usage of small-area games. To effectively coach a late-game situation, you don’t have to set up this exact scenario.

You can incorporate little extra challenges in your team’s small-area games in order to help your players understand these principles. Stop practices and small area games when it slows down a bit and make sure your players are outnumbering on the puck. One phrase our staff uses is “Need The Puck.”

One small-area game that I really enjoy and I plan to incorporate a lot more of this year is a variation of an in-zone 3 on 2.

Chances are, you’ll have your own strategy for trying to tie the game. But when you get in that timeout situation, spend 15 seconds before you go over your faceoff play or tactics and reassure your players that if they come up with loose pucks, they’ll have the best chance to win. 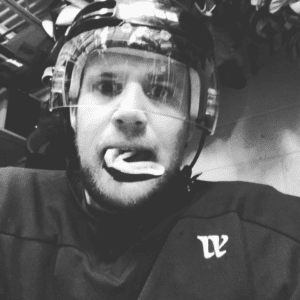 Tom lives in Chicago, Illinois and is entering his fourth season coaching the Sandburg Eagles High School Hockey Club. He's been coaching for 8 years and also had a brief stint in the front office of the FHL's Danville Dashers. Tom's tactical approach meshes film breakdown, analytics, and outside-the-box comparisons to encourage skills and hockey IQ development.