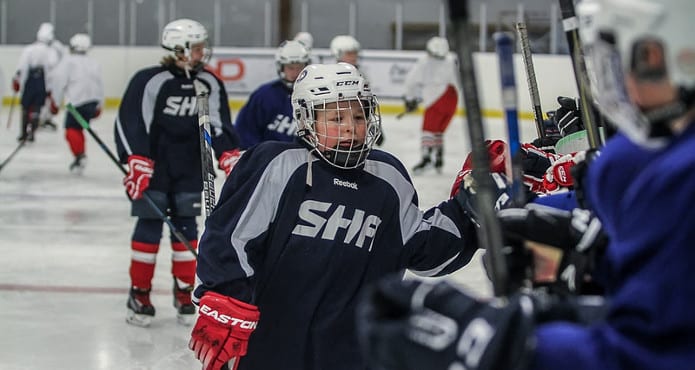 Select based tournaments/organizations isn’t something new, especially when you are in North America, but a relatively new concept; becoming increasingly popular, here in Europe. The mass majority will say that selecting children when they are young sends a wrong message and promotes all the wrong ideals in sports.

When you hear people speak about select teams you hear that they are able to play against high quality competition that they normally wouldn’t be able to. This is true since most of the tournaments are world tournaments, so USA and Canadian teams will get to play against teams from Finland, Russia, Sweden…etc.

The first thing we have to look at is the process that these teams are chosen from. There will be suggestion by area coaches and teams, that this player or that player is good, and then they will be “invited” to camp. The age level that they target are kids that are between the ages of 11-14. It is easy to get caught up as a parent when you hear the sales pitch, and as a parent you want to give your child every opportunity to experience the ultimate dream of playing in the NHL.

Lets look at the tag lines that select organizations use:

Here comes the part that is the most interesting – The cost of participating in these events!

Most of these will run a certain player between $1500-$3000 after all tryouts and tournament costs are figured in. Now this is just for the player, this isn’t for the family members that will accompany their kids to the tournament.

Take a step back for a second and look at the $3000 number. It is a lot of money for the opportunity to play in a tournament. Now during the selection process you will be part of camps that will have your kids playing games. There is no real learning from this process, you play a game, and you do the best you can do. A lot of select organizations will play it off and say,“Hey….you will learn the game from coaches and realize how to play.” The honest reality is that you will play these games, be told a few things, but in the end the team is chosen by who is already good, and by who was given a special favor, not by who has potential.

Are your children really going to learn how to skate better, handle the puck smoother, learn how to score, and become more tactical, develop hockey sense?

Instead you will be roped into joining a camp put on by the select organization that will promise how to become better, but in the end it is really camouflaged as another tryout camp for the upcoming year. You eventually get caught in a spider web that says, if you don’t participate in this or that camp you won’t be up for selection. So you normally do what you think is right for your child and keep enrolling them.

When it’s all said and done your child probably plays a little over an hour in a week long tournament. You have paid over $3000 for your child to get one hour of ice time! Let that sink in!

The average going rate to rent ice privately is around $150-200 per hour.  When you take $3000 for 1 hour of ice, and break that down into training hours its ridiculous.  At the same time, who says you need to get an instructor when you rent the ice?  Renting an hour of ice with your friends and going out there to have fun, will enhance your creativity for those moves that you normally wouldn’t work on in real practice or at a camp.

Just remember, that not all kids will become elite athletes and there is no real fast track to the NHL, but there is a lot of propaganda. At the end of the day, if your child has what it takes, someone – somewhere will notice them!