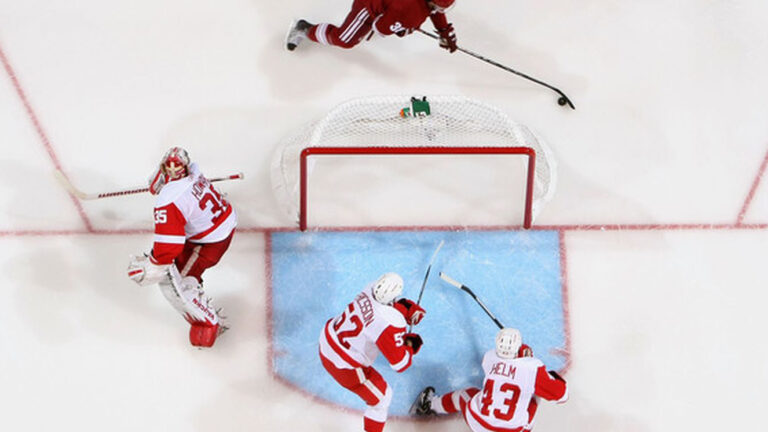 "This experience opened my eyes to the teams who use the back of the net in the offensive zone to their advantage in their strategy to include all five players in the attack."
5
(3)

As a self-proclaimed hockey nerd without a team to coach for the first time in 28 years, I have spent the past two seasons (the Covid years) starting a player video feedback service. Jim Montgomery and myself created Coaches Café, which regrouped 120 coaches world-wide from U18s to the NHL, and also started a podcast with Darren Gill, The Hockey Masterclass, focusing on navigating minor hockey years. I’ve spent some time consulting in analytics and consulting with coaches from all levels as well; I’ve had a lot of time to do deep dives and bounce around ideas and concepts with the coaching fraternity. This is how I ended up coining the term “Trap Goals.”

The past two NHL playoffs I had the privilege to work directly for an NHL Head Coach remotely, writing up post-game reports that would include tendencies, quick strike strategies, any areas that could be considered “fragile,” really it was a customizable report. This experience opened my eyes to the teams who use the back of the net in the offensive zone to their advantage in their strategy to include all five players in the attack. On the flip side, those defending teams that were able to disrupt or deny this access tended to reduce scoring against in defensive zone coverage situations. Many teams play 3 vs. 5 in a quadrant of the defensive zone, outnumbering and shrinking the area the opposition is trying to score from; maybe we stop thinking that east-west in the offensive zone comes from only D-to-D blueline passes?

Offensively all we want is SPACE!!! Accessing the trapezoid/back of net area can happen in a multitude of ways: on entries with & without possession, set face-off plays, and offensive zone plays (net cycling, high to low rims) to name a few. Entries under full control, getting to hash mark levels, gives players more space to make reads, delay, take to net, carry behind net, relieve pressure with pass/rim to the weak side; aren’t we tired of watching players skate themselves into the Zamboni door in the corner?

Concepts and strategies that empower players to play with fewer restrictions and to understand that since the game is typically played 95% or more of the time without the puck, support is key and a team’s well-established structure for relieving pressure can allow teams to continue to play fast. And yes, even on place & chase situations, teams can become very proficient by playing behind the opposing team’s D, changing point of attack quickly on retrievals and not underestimating a teams’ ability to create turnovers below the goal line, say on the forecheck, which typically opens the slot for quick strike plays.

"This experience opened my eyes to the teams who use the back of the net in the offensive zone to their advantage in their strategy to include all five players in the attack . . .

Jon Goyens has 28 years of coaching experience from the lowest levels of minor hockey all the way up to becoming a Head Coach in the QMJHL. He has held almost every position from assistant to head coach, development/skills coach, video coach, guest coach at pro camps and now runs his own player video feedback services, along with analytics & coaching consulting. In fact, just recently has added broadcasting to his repertoire as a colour commentator on a part-time basis for the Laval Rocket of the AHL on TSN 690 radio. As the winningest playoff Head Coach in the history of the Quebec U18 AAA League with the Lac St. Louis Lions and with his time in the CHL, he has seen 25 players get drafted in the NHL. Lastly, and on par with all his accomplishments as a develop first coach, he has had the privilege to work closely with future Hall Of Famer Hilary Knight.