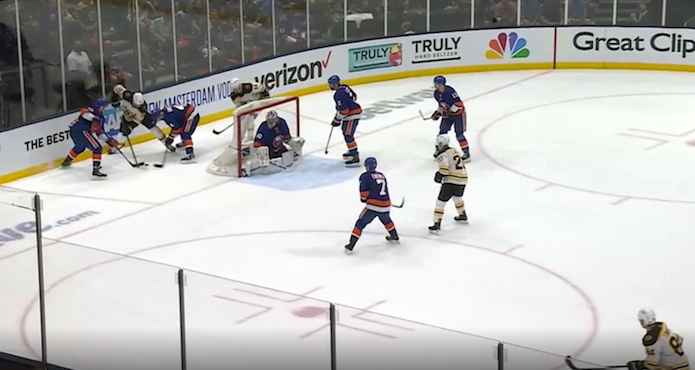 They're playing his system perfectly.
0
(0)

That phrase has a negative connotation in hockey. Picture yourself for a moment hiking along a snow-covered trail in the Minnesota or Manitoba wilderness when you come upon the den of a wolf. Freezing in your tracks, you sneak a peek inside to see a handful of squirming wolf pups. No mama in sight. Has she retreated into her den hoping you won’t come any closer? Probably not. If you can’t see her then you will shortly. The wolf will protect her young on her turf by attacking without a moment’s hesitation. Move along, and be quick!

What does this have to do with the New York Islanders?

The Islanders were the most improved team in the league by 5v5 goals for/goals against when Barry Trotz took over after winning a Stanley Cup with the Washington Capitals. How do they do it? Among many other things:

I wanted to know if the Islanders were doing anything special when they’re leading in the third period of a hockey game, so I studied an eight-minute stretch of their win in Game 4 over the Boston Bruins.

How did they lock things down in the third period against the Bruins? How are they so effective against a high-powered Bruins offence?

So my project was simple. My original hypothesis was that I’d see something change after Mathew Barzal scored, but the handful of shifts leading to that goal proved me dead wrong.

First, a quick note on faceoffs that illustrates the general flow of play in my chosen segment of time. After the Barzal goal, the Islanders had five offensive zone faceoffs to two in their D-zone. Imagine the relative sense of ease you’d have standing on the bench up a goal while your team continually starts 200 feet away from your net.

And 200 feet away from our net is a great place to start, so let’s go.

Hands up if your teams have been guilty of staying high above the circles when an opposing D-man is winding up behind the net. Yeah, me too. We trick ourselves that we’re playing defence to protect a lead by playing safe, but it’s counter-intuitive. Teams are too organized on their controlled breakouts and zone entries that we’re just giving them a free pass into our zone when we hang back. The Islanders do a great job at working away from the puck in this stretch, and the result is limited opportunities for the Bruins to set up and get comfortable. Everything is forced.

The Bruins move the puck well enough in the clip below, but it’s 1-on-4. There are still four Islanders to go through and the result is a puck out of play. As we’ll see in the habits to come, this pressure leads to control of the neutral zone and confrontations on the defensive blue line.

Watch here as two (two!) Islanders chase behind the net. No time to get organized, and even though the Bruins break the puck out, they settle for a dump-in and a 50/50 puck. I’m feeling ok about that if I’m Trotz.

They're playing his system perfectly . . .