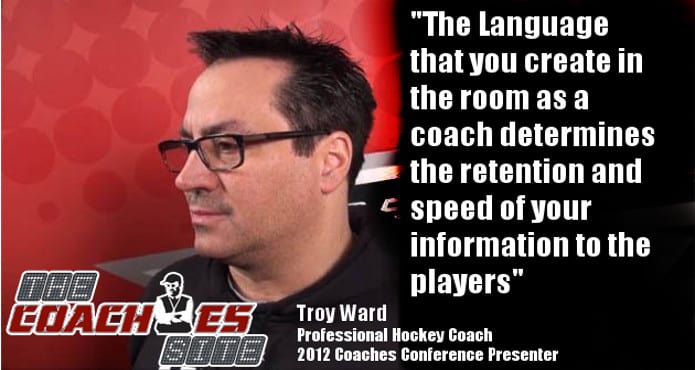 Often, coaching is as much about the delivery as it is the message. At the professional level, all coaches are well versed in the X’s and O’s. With the amount of pre-scouting done through video, the opposition’s habits and tendencies are largely transparent.

With this in mind, it’s the culture, routines, timing and means of communication that allow for coaches to be creative and design their own “style”. Often it takes years of experience, mentorship and trial and error for coaches to find a method that best fits their own personality in addition to the personnel at their disposal.

Athletes are creatures of habit, and most who’ve succeeded at an elite level have responded to structured interaction between their coaches and support staff.

Coaches have to consider several factors when determining the best way to communicate with their players throughout the season, such as:

There is a lot to consider.

I reached out to Abbotsford Heat Head Coach Troy Ward to gain some insight into how he manages his team’s game day routine. Knowing the amount of work and consideration Troy, along with assistant coaches Luke Strand, Cail MacLean, and Jordan Sigalet, put into preparing their team, I asked if he could take me through his game day process.

Be the first one at the rink

Ward is the first member of his staff to arrive at the rink in the morning. According to those inside the Heat organization, this could be as early as 4am.

He uses this time to get organized to address the needs of his assistant coaches to ensure they are good teachers. Luke Strand is the team’s offensive coordinator (play with the puck) and Cail MacLean is the defensive coordinator (play without the puck). Jordan Sigalet takes care of the goaltenders. Each coordinator will have a 5 -10 minute meeting with the team, or group of players, in the morning prior to the pre-game skate.

Ward will meet with his staff beforehand to blend his thoughts into their presentations, so that their message is delivered with clarity and consistency.

His first priority is the 20 players who are going to be playing that night. If a player is “off”, or requires extra direction, he’ll meet with them 1-on-1.

Once the player’s who are in the line-up have been dealt with, he’ll focus on the players who are scratched from the line-up. In the American League, having to decide who plays and who sits, is the nature of the business. When communicating with a player who is scratched, Troy stressed dealing with them directly and honestly.

In his words, honesty comes down to two things: clarity and hope.

Take the time to make sure each player leaves the office with hope and an understanding of what they can do to get back in the line-up and contribute.

A lot of information is going to be communicated to the players leading up to a game. It can’t all come from the head coach. You have to pick your spots.

Ward believes in a “hands off” approach, allowing his assistant coaches to do their jobs. He plans to address his group once during the day, generally two hours prior to puck drop and only for 3-8 minutes.

Occasionally, he will meet with his team in the morning to make announcements, such as trades, call ups, travel arrangements, etc. However, it’s rare that he’ll “double dip”, as he puts it, and go back to the team twice in one day. If you’re in front of your team too much, you risk losing your “stinger”.

In other words, your message gets lost in the noise.

Ward has a success pyramid displayed in his office, which outlines the process his team will follow throughout the season. The foundation of the pyramid is built on forming good habits and only expending energy on things you can control. Each time he addresses his team he sets their focus back on the pyramid. This keeps his message consistent and his players’ process orientated.

Every move Ward makes in preparation of that night’s game is methodical and well thought out. It’s all part of his process.

He suggests that your tone, posture and body language are just as important, if not more, than the message itself. Your tone has to be consistent. If it changes, the message changes. If you allow outside distractions affect your tone, the players will know.

“How they’re going to take it, depends on how you give it”

His tone doesn’t really change, although there is the potential for a shift in intensity, due to the schedule. He may heighten awareness with his tone, but in a positive way.

He also cautions not to let your intensity take over. If the process becomes result orientated, you lose sight of the process.

He doesn’t see anything positive in doing so. The players are mentally and physically exhausted after going to war for 60 plus minutes. They already know if they played well or poorly. There is also the risk of saying things you’ll regret and sending a new or conflicting message.

Instead, he provides himself the opportunity to watch film and form a thorough evaluation of his team’s play and each individual’s performance. The following day, he’ll be better fit to calmly and clearly articulate his thoughts.

Sticking to the process

The process is a product of experiencing both victory and defeat. Of taking parts from each experience through one’s coaching journey and branding your own road map to success. Each season will present different challenges and unforeseen obstacles. Having a modus operandi will enable your players and staff to be present and focus on the task at hand.

The key, says Ward, is not to drift from the process.

* Special thanks to Troy Ward and his coaching staff for granting me behind the scenes access to their facilities and game day routine. Wishing you good luck the rest of this season!