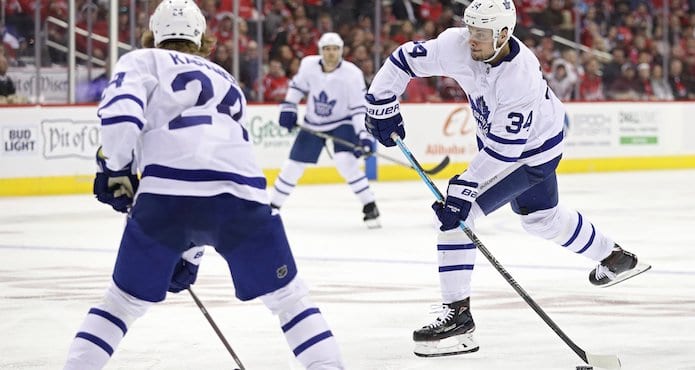 There's more to scoring goals than having a good shot.
0
(0)

Scoring goals is no easy task in today’s game, at any level.

With defensive zone systems becoming tighter and more aggressive, defencemen more mobile, and the continual evolution of goaltending development, it is not easy to be a consistent scorer. Whether coaches or recruiters want to admit it or not, point production is a key factor in a player’s ability to make the jump to the next level, especially true for forwards.

There must be a minimum skill foundation at Level A, to be able to just simply play at Level B. Passes at the next level are quicker, spaces close rapidly, and time to make decisions and handle the puck become diminished. Therefore, in order to make “every shift” plays at that next level, never mind scoring, your skill-set at the level below needs to be pretty solid. Hockey IQ, work ethic, coachability, skating — those areas are all boxes that must be checked off as well, to make that jump.

Shooting is something that so many skills coaches spend countless hours on. Shooting in stride, shooting off of both legs, catching and releasing a puck, changing the angle of the shot… all great stuff. These are translatable skills that you can add to your arsenal, when the time arises.

But there’s more to scoring goals than having a good shot.

How often as coaches or skills coaches, do we spend time on players being able to put themselves in a spot, to use their shot? What are these players’ assets, and how can they use them to their advantage, to generate shots?

Having the tools is fine and dandy, but at the end of the day, if a player can only get himself into a shooting spot once per game, all of that shooting work wasn’t a tremendous use of a one-hour skill session, was it?

More often than not, shooting is not the issue when a player isn’t scoring — it’s getting into shooting areas. Part of it is willingness to compete, but part is also skill.

Handling pucks around the body, shoulder/stick/feet fakes, puck protection, first step separation speed — these are just a few skills that goal-scorers must be great at.

With the tools in place, we need to challenge ourselves to teach players how to get themselves in great shooting spots.

I am a firm believer in the philosophy that the buzz term “skill development” is more than developing the tools in the toolbox, or even blending skills. These must be able to be implemented into a player’s game.

Situational habits, reading angles and spaces, processing at high rates, manipulating opponents; these are skills as well. Without them, your skill-set at the next level will only take you so far, and may limit your chances of climbing the playing ladder.

Forwards, are you able to generate shots off of the rush? Many think just shooting in stride will allow you to do this. But, what about spacing with the defenceman, and gaining valuable ice? Or perhaps a change of speed when entering the zone? Can you generate shots off of extended puck possession in zone?

Can you utilize fakes to turn checkers’ skates, open a seam, have separation acceleration to get to the seam, and shoot in stride? What about puck protection and placement to get from the boards, to in between the dots?

Defencemen, how deceptive are you on the blue line? Can you handle a clearing attempt off the boards, and then identify and capitalize on a shot lane upon dictating a checker? Are you able to identify seams to receive a puck, and then catch and release in one motion? Are you creating a “layer” on a zone entry with good passing angles, for a high pass and a shot?

Building the skills involved is absolutely the first step, and a necessity. Once we have developed shooting itself however, from so many angles, the work is not close to done.

As we can see, there are numerous other skills that now go into shooting. First-step acceleration, puck control, deceptiveness, awareness, and so much more. Becoming a great goal-scorer, is not just having a terrific shot.

We now must complete the picture by working on various aspects as to when and how a player can use these tools. Players have to be educated on how they can get to “Grade A” scoring ice, or generate shot attempts. Just like any skill, confidence will come from reps.

Implement shot-generating scenarios into your practice or skill session. Off of a cycle, off of a zone entry, whatever it may be. How are you going to put yourself in a spot to shoot?

Chance Szott is the Owner/Founder of CrossIce Developments- an elite hockey development company based in Central Alberta. Chance and his team of 6 skills coaches, pride themselves on their 3 core values. Skill transfer to a game environment, preparing players to play at the next level, and enhancing leadership skills. www.crossicedevelopments.com.