Why the trapezoid power play setup will confuse penalty killers 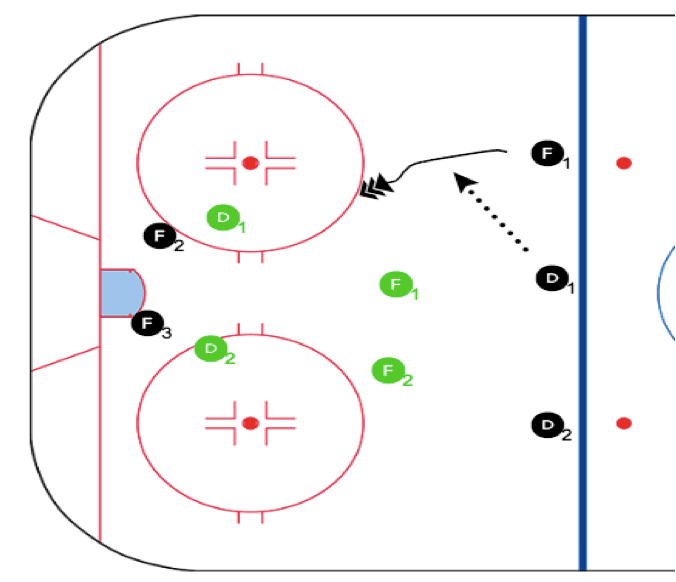 It's an unconventional look to throw at the opposition.
0
(0)

The hockey coaching fraternity is notorious for stealing ideas.

What works for someone else might work for me, or you, or our opponents. I’ve been studying the trapezoid power play in detail and it’s something I plan on implementing with my team this upcoming season.

But first, the basics – the power play is an opportunity for teams to gain momentum, not to mention the possibility of creating scoring chances, and scoring goals. Any of these outcomes will give a team at least a momentary advantage.

But what happens if we break these habits, and look at a power play setup that will limit the penalty killer’s options and create more scoring chances while using more of the zone?

Oh, and being original? Introducing the trapezoid power play set up.

The trapezoid is a power play setup that creates odd-man attacks on defending players. The setup can be visualized below: 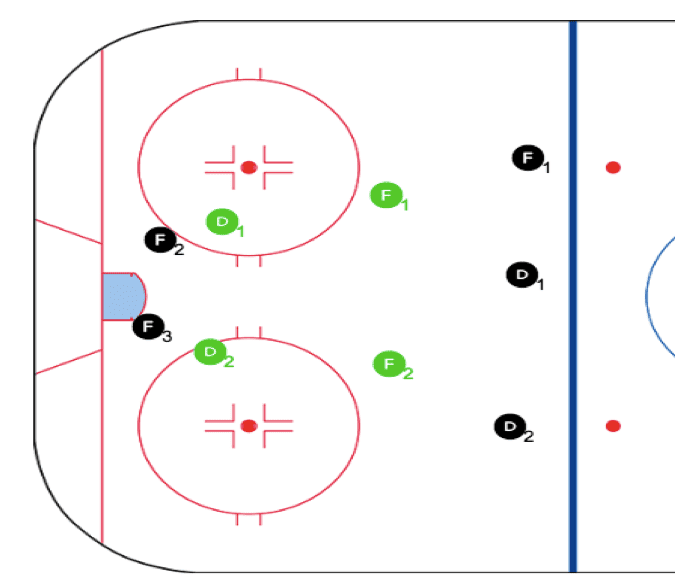 The trapezoid setup is designed to force penalty killers to make tough decisions and go against what they have been taught their whole careers.

With two forwards net-front, penalty killing defencemen are forced to stay in front of their own net, as they have been taught that that area needs to be protected. Otherwise they will be giving up a 2-on-1 in a high-quality scoring area.

This creates a 3-on-2 situation at the top of the zone, forcing the penalty killers to make tough decisions. Being in shooting lanes is a tough task to do as they can only be in two of three lanes. This creates an opportunity for a high volume of shots towards the net. 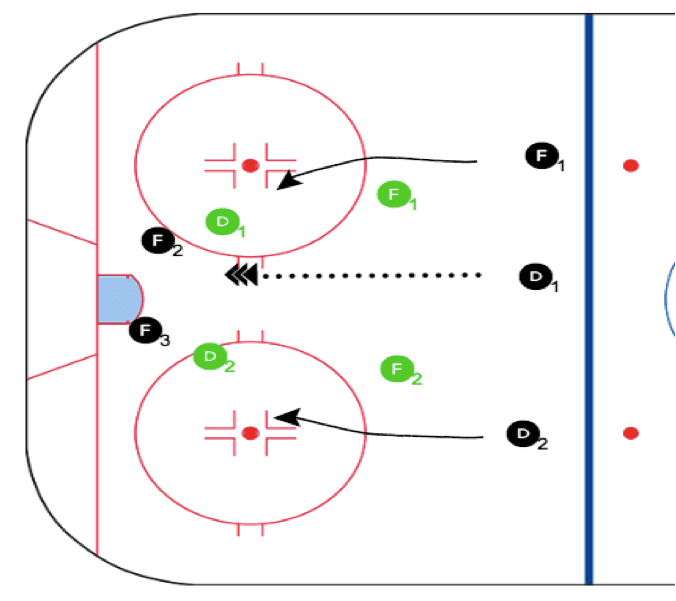 The ideal puck position to start this power play setup is with D1 in the middle of the ice. If no penalty killers move into the shot lane, D1 has an open shot to the net, with four players net-front, while F1 and D2 are driving for rebounds/retrievals.

If one of the penalty killers decides to get in D1’s shot lane, the opportunity for either D2 or F1 is now open. As you can see below, F1 on the penalty kill gets in the middle shot lane. This opens up F1 on the power play to receive a pass from D1. With F1 being too far out of position to recover to a good defensive position, F1 will have a clear lane to the net.

Having two forwards net-front should keep both defencemen at the net as well, as this is what they have been taught.

If D1 decides to jump F1, F1 can simply make a pass to the low forward for a 2v1 net-front – something I am sure many coaches on the power play would be happy with. D2 can also sneak down for a cross seam pass as another option for F1.

The same would hold true if F2 decided to get in the shot lane, opening these options for D2.

The trapezoid vs the diamond

This power play setup could also be effective against a diamond penalty kill, as there would be a 2v1 net front. The top players would need to open up lanes in order to make passes to the down-low forwards.

The effectiveness of this power play is a result of a few things.

For one, it forces the penalty killers to make decisions that they are not used to making, in split-second moments. This usually results in breakdowns, which can lead to scoring chances and goals. It also creates an unmatchable 3v2 that will result in a shot one way or another.

Lastly, and maybe the most effective aspect, is the fact that this it’s unconventional. Implementing this power play setup would be something a majority of coaches will have not seen. Therefore they will not know how to defend against it initially. In order to defend the trapezoid power play effectively, players will have to go against the conventional things they have learned as players.

My name is Kevin, and I am currently an Assistant Coach with the University of Waterloo Women's Hockey Team. I am also the Head Coach of the Major PeeWee AAA team in Kitchener, ON. I have been coaching for 7 years, and always love discussing all things coaching. If you have any questions, or any rebuttals to my posts, feel free to reach out to me at [email protected]