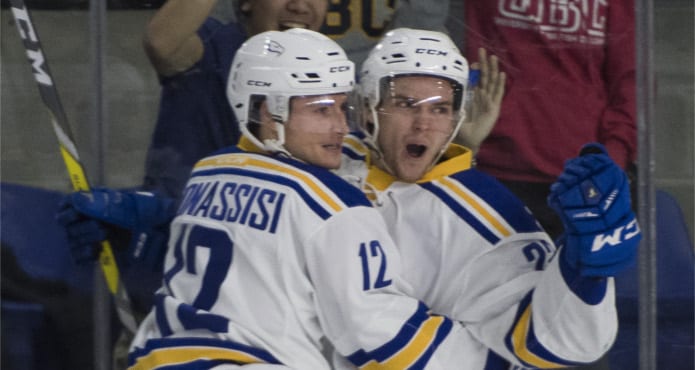 Last week in part one of my interview with Chase Clayton we touched on the realities of life on campus when you’re a hockey player and a student at one of the most prestigious business schools in the country. It’s tough, but for Chase, being tough and dealing with adversity just comes with the territory of being a lifelong hockey player.

Kelvin: You played in the WHL and the Alberta Junior Hockey League, how did those experiences help you acclimatize to life on campus?

Chase: Moving away at a young age forces you to learn to be self sufficient. You don’t have your mom around to do your laundry and cook meals every day or just remind you of things you need to do. It taught me how to be a professional. You have to meet deadlines and achieve expectations that are given to you by hockey and school and life. It teaches you how to be part of a team dynamic and to learn what it’s like to be a small part of a very big business.

How did your coaches in minor hockey prepare you for junior hockey?

I remember learning the skill side of the game, but also how to play within a system while also being creative. In bantam the coach I played for had taken teams to western Canadian championships and had developed many players before me to be successful, his name was Troy Campbell. He helped me learn what it would be like to be approached by scouts and how to play with that pressure. At that time I was highly touted, so it was stressful. But I like stressful. My parents didn’t put a ton of pressure on me, my Dad helped ease me through that process. I personally like to play with a little bit of pressure. I like to be relied upon to be a top performer.

Back to university, these days you’re relied upon all over the ice, you kill penalties, take abuse in front of the net on the power play, and you wear an A as an assistant captain. But you have a team to help, that’s not always the case with school, right?

“But it’s not only on the coaches. The flipside is that adversity is what has shaped me into the player, the athlete, and the person I am today.”

You have to switch gears between school and hockey. Hockey is my break from school. No matter how shitty your day is or how tough class has been, you know that you can go on the ice with your teammates and worry about being a hockey player. That’s a huge advantage to being an athlete. Student life on campus is normally isolated, students here are so dialled in on school. I think playing hockey it gives me a more rounded university experience.

You’re an adult now, you’ve seen a lot. What advice would you give to junior coaches preparing their players for the next steps on and off the ice?

No matter how significant a role a player plays on the team, you want to hone in on each individual and their development. You don’t want to leave anyone in the dark. Open communication is a very undervalued asset. Whether a player is a key focal point on the roster or not, they need to know where they stand. Players want to know how they can push the envelope and find out how they can get more involved and push the people in front of them. My younger bother is going through it right now, I went through stretches of poor communication and it a was tough hurdle to get past.

But it’s not only on the coaches. The flipside is that adversity is what has shaped me into the player, the athlete, and the person I am today. Despite not playing pro hockey I’ve got a great opportunity to further myself as a professional and find alternate career paths, but also to have the opportunity to play pro hockey if that’s the way I want to go.

Chase, a wise man once told me that if you’ve got choices, it means you’re doing something right.

As a student athlete, the best takeaway I’ve got so far is I’ve realized I serve a lot larger purpose in life than just being an athlete. Before I came to school I was so focused on being a pro hockey player. It’s been my one focus my whole life, it’s still my primary focus, but going to school now I realize I can have a much larger impact on the world than just being a pro hockey player.