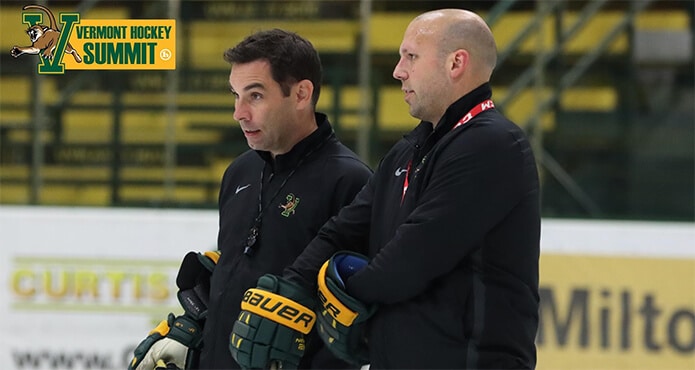 Don't miss the Vermont Hockey Summit taking place at the University of Vermont.
5
(2)

The goal of many people involved in hockey is to leave the game better than they found it. In the spirit of that, Todd Woodcroft, Head Coach of UVM Hockey, and Drew Michals, UVM’s Director of Hockey Operations, are helping organize the first ever Vermont Hockey Summit. This summit is free for anyone who wants to attend.

The genesis of this coaching event, which takes place at the UVM campus on Saturday, September 10 from 8:30 a.m.- 5 p.m. ET, was to share ideas with all levels of female and male coaches. “The summit is open to anyone who wants to improve their coaching knowledge and coaches from all skill levels are encouraged to attend,” said Michals. “We have accomplished coaches like Dom Ducharme and Venla Hovi, who have donated their expertise to help coaches learn more about their craft.”

“We are making an effort to support the lifeblood of youth hockey – the coaches,” added Woodcroft. “We’re extremely proud of the speakers taking part in the summit, including NHL coaches, Olympians and area High School coaches.”

It is exceptional to note that half of the presenters are female professionals, including US Olympian and current pro player, Amanda Pelkey. The organizers also made sure to include representation from On-Ice Officials, inviting ex-UVM player Chelsea Rapin to talk about her own Olympic experience as a referee.

“It’s a privilege being able to share experiences with like-minded coaches, and we’ve worked hard putting together a roster of speakers who reflect our principles. This is all about growing hockey in the greater Vermont region and helping young girls and boys by further educating their coaches,”  Woodcroft continued. “Personally, I am excited to learn from all the pros we have in attendance.”

Woodcroft is entering his third season coaching the Catamounts, coming off 20+ years in the NHL. In addition to his NHL coaching experience, Woodcroft has coached in a World Cup and seven IIHF World Championships, winning gold with Team Canada in 2004 and Team Sweden in 2017. He most recently won the Bronze Medal as an assistant coach with Sweden at the World Juniors in Edmonton.

In addition to learning from some sharp hockey minds, each attendee will receive a complimentary lunch (generously provided by Handy Toyota), tickets to UVM Hockey games and drill pads.

Learn more about the event, including how to register.

KOHA and The Coaches Site team up to support coach development