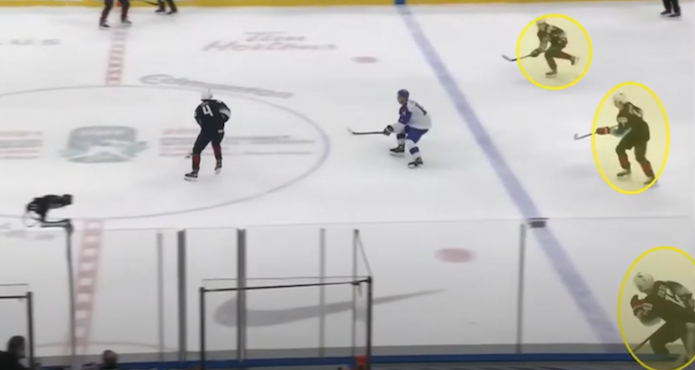 From the drop of the puck in first game at the World Juniors, not only was I surprised by the pace, I was impressed. As a hockey fan, how could you have not loved that gold medal game?

For me, the last 10 minutes of the second period in that game was some of the most entertaining hockey I’ve watched since the NHL playoffs.

Team USA may not have had the same number of first-round draft picks as Team Canada, but they showed a great work ethic, were able to create a lot of offence, and it never hurts having the tournament MVP, Trevor Zegras, dominate each and every shift. Let’s take a look at how they were able to generate offence at 5v5 and on the power play, with an in-depth look in the 12 videos below.

Team USA didn’t have a lot of set face-off plays on the power play. Rather, they set up their 1-3-1 then attacked right from the face-off. With that been said, they tried two different face-off plays during the tournament.

On one, they had a defenceman walk the line, pass to the wall, and attack from the goal line right away. The other one was a D to D and then attack right away.

Team USA used the goal line option every single time they were able to, and they did an amazing job at it. They had a lot of threats with Arthur Kaliyev on the side and Cole Caufield in the middle. Take a look at some of the chances they created by passing or attacking the net.

Passing on the power play

USA’s power play was based more on playing low than high. But, when teams made adjustments, they were still able to create offence. With their skillset, making a seam pass or a one-timer off the flank was pretty easy for this team.

Take a look at the defenceman using deception to create a passing lane. And when they attack on the side. We can notice they attack right on the dot lane and are looking to snipe on the goalies.

At the same time, the bumper is a great option too, the weak side flanker is coming to the net, and the goalie presence can be an option on the side of the net or can stay in front.

They had two five-on-three power plays during the tournament and I wanted to share with you the full 5v3. Nothing fancy here, but a lot of movement creating a lot of confusion. Everyone is an option.