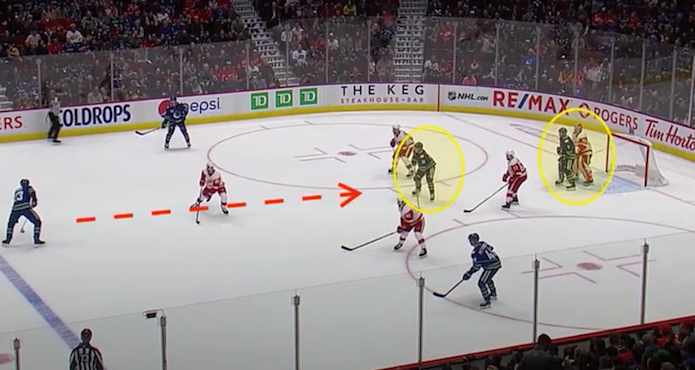 I cheated on this one. I wrote this article for myself, first, to create a new playbook for my team. But because I love sharing my work, I have also decided to show all of you why the Vancouver Canucks had success on the power play last season.

In this article, we will break down seven power play tendencies from the Canucks last season. Travis Green’s team finished the season fourth in the league with a 24.2% success rate, with assistant coach Newell Brown in charge of the power play.

1. Inside the blue line, dot to wall

If you attended the Virtual Hockey Summit, you know what I’m talking about here. If not, take a look at the flankers getting inside the blue line, dot to wall.

The Canucks are able to create time and space for themselves. It is hard for the penalty killer to chase high. After, it’s only a matter of what you want to do from there, an option, attacking downhill on the outside of the dots.

I thought the Toronto Maple Leafs and Boston Bruins were the first teams to do this, but I was wrong. The Canucks use this option extremely well.

When they are going downhill, instead of keeping a player at the net-front position, that player gets open at the far post. Look how much space and confusion they can create because of this.

Going downhill is one thing, but you don’t always have the seam pass open and you don’t always want to bring the puck back up top for the power play quarterback. This is when we see the Canucks use an option on the goal line.

They're one of the best in the NHL with the man advantage . . .