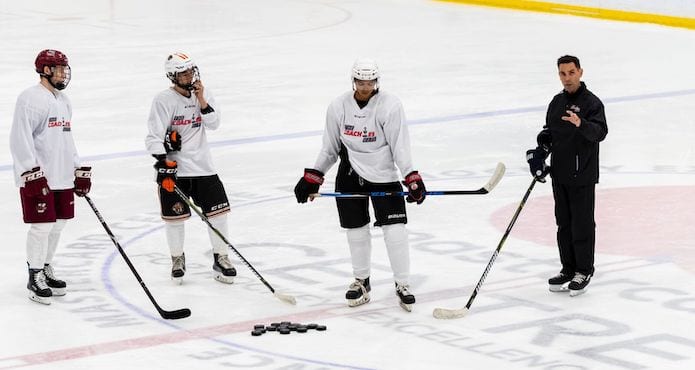 Watching the rise of the Winnipeg Jets has been a treat for hockey fans and coaches in the Manitoba capital for a few seasons now, so you can imagine the excitement of seeing them in action, in games and practices, every day. Assistant coach Todd Woodcroft is one of the people responsible for flying the team in the right direction, so for him, it all comes down to playing the game with pace and execution.

It’s a game that has to be played fast. You have to move the puck fast, make decisions fast, and playing fast as a team.

How do the Jets incorporate that philosophy? After all, everyone wants to play fast. For Woodcroft, it starts by moving the puck north immediately. There are some strong puck moving defensemen in Winnipeg in the hulking forms of Dustin Byfuglien, Tyler Myers, Jacob Trouba, and perhaps the best of the bunch, Josh Morrissey, who are encouraged to give the puck to the forwards as quickly as possible. After that, it’s up to Wheeler, Sheifele, and the gang to enter the zone with speed.

From a coach’s perspective, hockey can’t be about scoring. It’s about creating offensive zone time and sustaining it.

Check out a trailer for Todd’s presentation below, and if you like what you see, watch the entire premium video with a TCS membership.