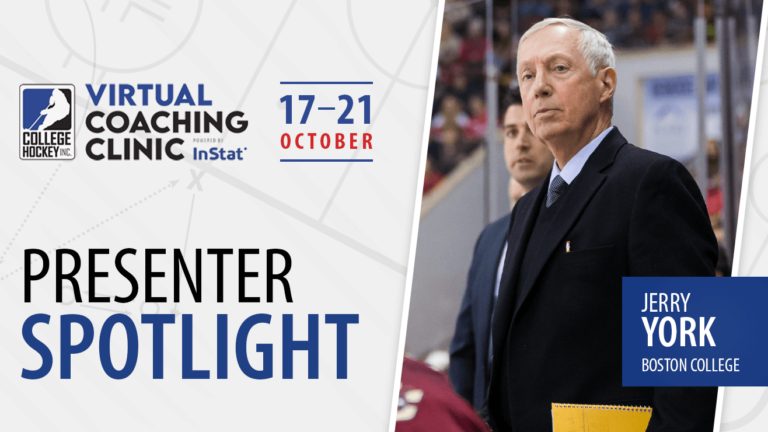 The NCAA's all-time winningest coach will sit down with TCS Founder Aaron Wilbur for a one-on-one looking back at York's remarkable career.
5
(1)

When Jerry York retired from coaching this past season, he did so after 50 years behind the bench in the NCAA. To put that number in perspective, Walt Disney World turned 50 last year.

Not only has York been coaching hockey for as long as “The Most Magical Place On Earth” has been around, he’s done so at the highest collegiate level possible. Add in his playing career from youth hockey to the NCAA and York has practically had hockey on his brain since he had a soother in his mouth.

During the upcoming College Hockey Inc. Virtual Coaching Clinic, being held from October 17-21, we’re fortunate to have the 77-year-old sitting down with The Coaches Site Founder Aaron Wilbur for a one-on-one looking back at York’s remarkable career.

I could go on and on discussing York and his accolades, but the video below (from when he was inducted into the United States Hockey Hall of Fame in 2020) does the trick.

Having been in the coaching spotlight for 50 years, much is known about York and how he became the winning NCAA coach of all-time. But having the opportunity to hear it from him, in his words, with his memories, is going to be special.

Learn from Jerry York, along with our entire lineup of NCAA’s top coaches at the College Hockey Inc. Virtual Coaching Clinic. Become a member of The Coaches Site today to get FREE access to the clinic and save $30 on your first year.