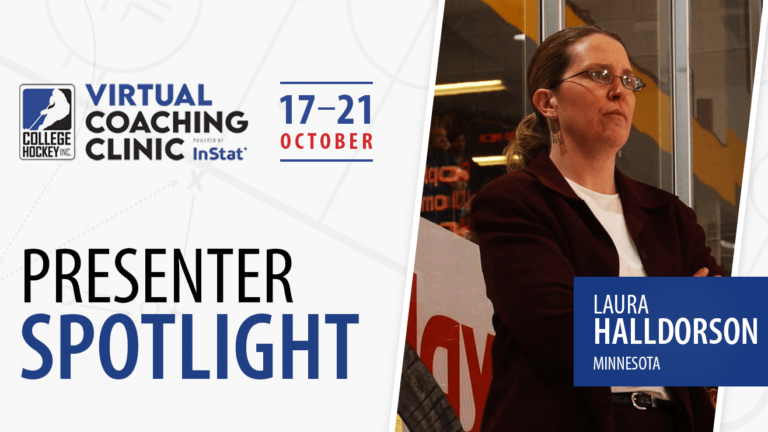 Muzerall and Halldorson, one-on-one. This will be an interview to remember!
5
(1)

If there was a Mount Rushmore for women’s hockey coaches, Laura Halldorson would be front and centre.

In 17 years behind the bench split between Colby College (1990-1996) and University of Minnesota (1998-2007), Halldorson put together an incredible record of 337-142-31. She is one of only 33 women’s college coaches to have surpassed 250 wins, coming in 15th on the list of career victories. That ranking includes both men and women coaches, but for female bench bosses, Halldorson is fourth all-time.

Halldorson was inducted into the University of Minnesota’s “M” Club Hall of Fame in 2014. The three-time National Coach of the Year won nearly 80 percent of games coached during her time with the Golden Gophers, and reached the NCAA Frozen Four eight times.

Halldorson, a product of Plymouth, Minnesota, has always been a winner. In college she earned her undergraduate degree from Princeton University where she played hockey for four years and won three Ivy League titles.

We’ve thrilled to have Halldorson speak as part of our College Hockey Inc. Virtual Coaching Clinic. What makes her appearance even more special is that she’ll be sitting down one-on-one to be interviewed by her former player and current Ohio State Buckeyes head coach Nadine Muzerall.

Muzerall was a star for the Golden Gophers as a player before serving as a member of the coaching staff. The first women’s hockey player to be inducted into her university’s hall of fame, Muzerall still sits atop the all-time goals scored list with 139 and graduated as the career points leader for Minnesota. As a member of the coaching staff, she helped guide her former team to four national championships and five-consecutive spots in the title game.

Muzerall has since taken over the women’s hockey program at Ohio State University and this past season, just her sixth behind the bench, she helped the Buckeyes become NCAA National Champions.

In 2022, Muzerall was named the WCHA Coach of the Year for her third time in five years after leading the Buckeyes to their fourth 20+ win season of her tenure and program-record milestones, including the record-breaking 2021-22 season that saw the Buckeyes earn their very first No. 1 national ranking and No. 1 NCAA Tournament seed before winning their first national championship.

During the College Hockey Inc. Virtual Coaching Clinic., taking place October 17-21, expect Muzerall and Halldorson to share some unbelievable stories and lessons of their time together.

This event is exclusive to members of the Coaches Site so if you’re not already a member, sign up today to get FREE access to the clinic and save $30 on your first year.