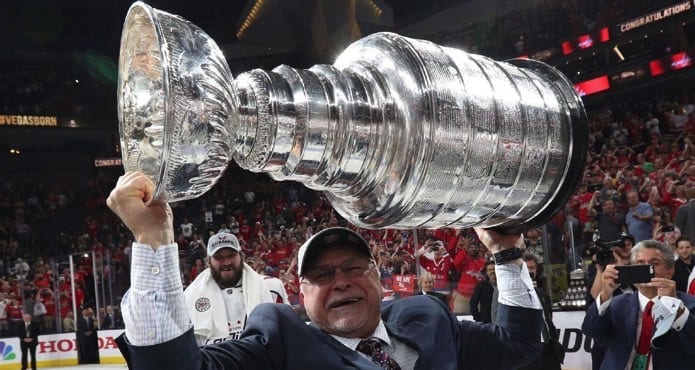 Managing a bench in the National Hockey League is the most important responsibility of Washington Capitals Head Coach Barry Trotz. But for Trotz, that bench management begins long before the game starts. It begins before the season starts as well. The Capitals’ bench management is the product of improving, tweaking, and moulding team culture – a trademark ability of Barry Trotz since his days as the first Head Coach of the Nashville Predators.

Now that the Washington Capitals are Stanley Cup Champions, it stands to reason that the team’s culture is in a pretty good place. But that wasn’t always the case.

Before their victory over the Pittsburgh Penguins in the second round of this year’s playoffs, the Capitals were accused of failing to live up to their potential. They couldn’t get it done in the postseason despite consecutive President’s Trophies, a Vezina Trophy winning goaltender in Braden Holtby, and some guy named Ovechkin who’s in the conversation with the greatest goal scorers the league has ever known.

Not for lack of trying. The Capitals hired different coaches. Ovechkin played different positions. Trotz tried tricks like playoff slogans that would inspire his troops on their path to the Stanley Cup.

For Head Coach Barry Trotz and the Washington Capitals, managing the bench this season required grit, character, and intuition. It’s why the coach challenged his superstar during a meeting in Russia before the season began. It’s why Braden Hotlby lost his net to Philipp Grubauer down the stretch and into the first two games of the postseason. These challenges are what made the underperforming Washington Capitals into the Stanley Cup Champion Washington Capitals, according to veteran defenseman Brooks Orpik in a post-game interview with Sportsnet’s Scott Oake.

This year, all the Capitals wanted to do was work longer than their opponents. Earn the right to play longer.

And play longer they did. Longer than any Washington Capitals team in the franchise’s 44 year history.

Now, about Trotz and that next contract…

Here’s a snippet of Barry Trotz speaking at our 2014 Coach’s Conference.

You can sign up for a free 30 day trial at our member’s site right now. Membership gets you access to the full versions of videos like these captured at our annual Coaches’ Conference. Join a world-wide community of coaches using these resources daily to improve their players’ experience.