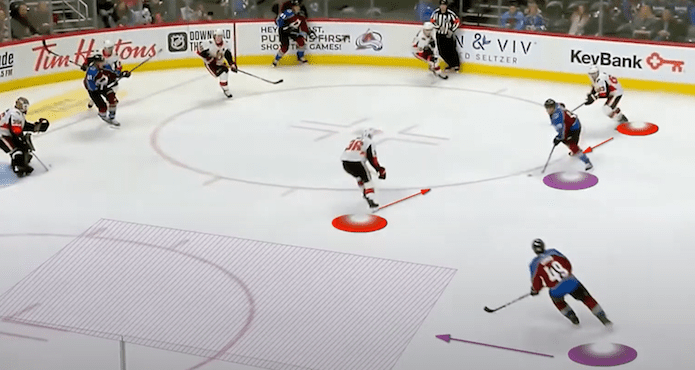 Some tactics and strategies to create space and generate offence.
0
(0)

It is no secret that today’s players are more skilled than ever.

The amount of resources available and frequency of on-ice training is at an all time high, but this doesn’t automatically equate to more offence. With advances in video availability, coaching structure and again, skill development, players and teams have become much better defensively, especially in their ability to suppress shots from high danger areas.

What this can then lead to is all of that skill and offensive ability fizzling away along the wall or in the corners and settling for lower percentage chances. The goal is then to identify tactics and strategies that can be deployed in order to create space to utilize our skills effectively to create more offence. Hockey is an invasion game, and like all invasion games, it comes down to controlling space.

Below are four possession tactics that we can use manipulate space and control the offensive zone.

Hockey is a game of 1v1’s and when in the offensive zone, there will be a minuscule amount of time when the puck carrier is not confronted by at least one defender.

In order to maintain possession of the puck, players are taught from a very young age that they need to protect it, which is exactly true. The problem lies, however, when players always protect pucks outside of the dots, stop moving their feet, and spend the entire sequence in low danger areas, without ever working to get to better space.

Instead, while still applying the key principles of puck protection, players should look to initiate contact with their defender. This will allow the offensive player to “cut the hands” of the defender, and change their posture, making them less effective to create a turnover.

The offensive player can create space in front of them to attack, and to the side of them, which allows them to roll off their defender. In the following video you’ll notice the deliberate actions by the puck carrier to initiate contact with their defenders, while protecting the puck to create space for themselves and the next play.

One of the fundamental pillars of offensive play is puck support, but often times, especially at a young age, support is misinterpreted. Players spread out far away from the puck, getting “open,” however this leaves our puck carrier alone and creates longer, more challenging passing options.

Some tactics and strategies to create space and generate offence . . .