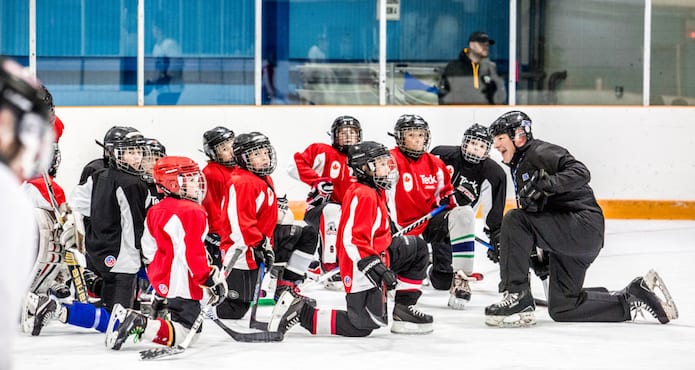 Brad Hamacher is back to follow up on his popular first post outlining some of the harsh realities of our game in the minor hockey system, 5 Myths Standing in the Way of Youth Hockey.

At some point someone started spreading the gospel that local league games are no longer important because “real teams” are only concerned about their national ​My Hockey Rankings position … a ranking for 10 year olds​. Upper ranked MHR teams refuse to play many teams as it negatively affects their math and ranking. Let me repeat that. Upper ranked teams refuse to play lower end teams. They make phone calls to tournaments and ask for guarantees that they will NOT be bracketed against any team below a certain MHR placement. If you don’t chuckle in some way over that, then this article probably doesn’t fit in your wheelhouse.

My Advice: I got nothin’ here. Speechless actually.

You Have To Showcase Young Players Constantly

Some CA teams at the AAA level made 14 trips last season. FOURTEEN TRIPS. Do you know how many additional scrimmages and extra practices and full time off ice trainers and full time nutritionists you could get for the expense of making 14 trips? Going along with a previous point in Part I of this series, parents are also convinced that from the earliest age, kids need “exposure”, particularly those of us in less traditional hockey areas. I’m still trying to figure out what exposure means – exposure to what? Ebola, chicken pox, bad airplane body odor?  I wonder if the two or three recent verbal NCAA D1 commits by 13 year old players​ is the driving force behind this zealous travel schedule. Or maybe it could be the handful of “scouting news” organizations that are profiling 25+ players per week on social media that are a whopping nine years old and every single one of them is a “can’t-miss prospect that will have NCAA D1 coaches and CHL scouts drooling”. Or one of my favorites this year “is a shoo-in for the NTDP”… in 7 years. Seems as legit as Russian hockey players’ birth certificates. Anyone notice Ovi’s grey hair at age 40… errrr I mean age 32?

My Advice: Once again, exposure and future opportunities gain importance as players age/advance. The debate constantly surrounds the proper age. I am 100% positive that 9 or 11 or 13 years old is too late to be noticed. I alluded earlier in Part I that there is some value in Bantam AAA and hitting the exposure circuit. Here in the west, we have the Bantam Major WHL draft so that is one indicator. Additionally, if the U16 level is now the most scouted level in youth hockey, then a season in AAA prior to U16 allows players to prepare for the travel, pace, compete level, expectations, culture, and so on. As for the hockey propagandists, if everyone stopped subscribing, following, liking, and retweeting these organizations/sites/people, they would devolve where they belong and the hockey arms race would return to a more normal level.

Players are lucky to get two shared and some kind of revolving/sporadic full ice practice every few weeks during the season. It isn’t enough. Period. A massive shortage of indoor ice has limited player development and raised prices significantly.

That said, be careful what you wish for.

Awhile back there was a multi-year powerful push to maximize ice space, have multiple teams on the ice at the same time, and utilize small area games and station-based practices. Originally it was presented and sold as just a better use of ice space and an efficient way to keep players moving on the ice as a way to combat the shortages. No doubt it​ has done a lot of good things from more touches, confidence in tight spaces, small area playmaking, etc. But it also has a time and place to be used. It can’t be the only thing we do.

My Advice: This is possibly the single largest challenge in youth hockey today and severely limits the true potential and development of players. My understanding of the economics is just not good enough to add anything of value on the indoor ice/rink side of things. If you are in a cold weather climate the solution is easier. In warm weather climates like California, we have to go outside the box by adding gym training, off ice floor ball, off ice stickhandling or shooting time. Adding off ice walk throughs and run throughs of systems or special teams helps alleviate using limited ice time for those functions. If the problem persists, we have to be more and more creative to serve our players. Just saying “the rink only gave me two hours a week” and accepting that is probably okay for an In-House level. Travel teams need to do much better.

Editor’s note: minor hockey associations up here in cold weather climates could learn from this advice as well

For all of the good it has done, I believe it has also done unintended harm as kids don’t know how to build speed through the NZ, they lack the practiced ability to create off the rush, they don’t understand neutral zone play, their vision of depth doesn’t get exercised to a larger/longer degree, and they have no/poor execution on full ice PP and PK. Without access to full ice, this is a real challenge. Coaches can use video sessions or parking lot session/sport court sessions to walk through these vital concepts as a secondary alternative to ice. Once again, take what you have, use it to the fullest, and get creative about the rest.

Let’s say for a second a player happens to be recruited to play on a spring tournament team. Maybe this player does so for a few years and plays 4 – 12 games for this ad hoc team. Now let’s say, for some reason, this organization and/or coach are the first ones to publicly claim credit for “developing” this player when the player accomplishes​ something beyond youth hockey. It happens all the time. There are organizations that want a piece even if the player was merely an affiliate or a draftee who never played a game or practiced with the team.  The piranha effect on social media is interesting. Have we lost sight of who this is ALL about?

The other day I noticed a player announce his commitment to a community college club team. Oddly enough, none of the tournament team piranhas attacked and claimed development responsibility for ​him. I was hoping to see “Proud of Boomer on his commit. Boomsy was an integral part of our tournament series in Daytona 5 years ago and will always be a lifetime brother of our program. Way to go Boomdaddy.”

My Advice: I think these organizations should elect a board of directors to interface with their hockey governing bodies and develop a partial credit Venn diagram and discuss and vote to find a consensus… wait what was I talking about? Nevermind. Keep doing the same thing. It is great comedy for a lot of us.

Part three is on the way, I’ll try to keep a little more light-hearted. Maybe. Until then keep your sticks sharpened and your skates taped. Actually, throw on some sunscreen and go enjoy the summer.