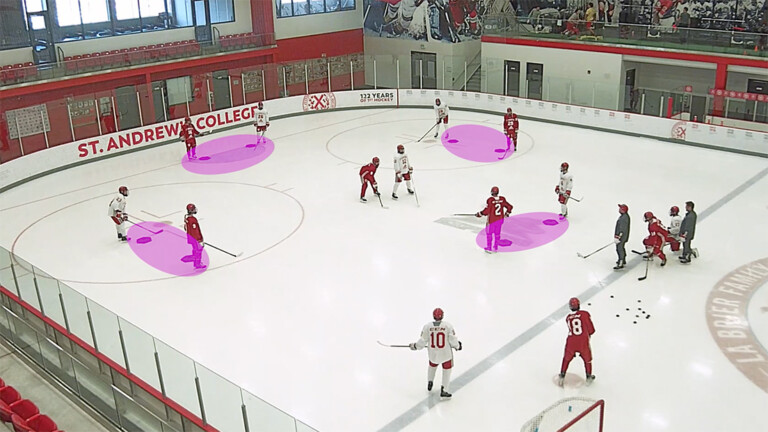 Check out three drills that will build layers of much needed hockey sense.
4.8
(5)

One of the most commonly and hotly debated topics in coaching circles is the ability to coach “game sense.” In the hockey context, “hockey sense” is too often considered this innate or fixed quality that athletes either have or don’t. While I won’t argue that some players have a higher floor when it comes to a starting point because of some inherent spatial awareness or other cultural experiences, its from my experience that players certainly can develop their “hockey sense” or they ability to feel the game and all its nuances.

I’ve come to be a big believer in representative design as a way to shape the environments we build for our players and that in order to help players develop all aspects of their game, creating a way for them to experience it in the most realistic manner possible is essential. As an invasion game, hockey is built on the four main phases of play that are central to all such games:

Using this framework of representative design to think about the specific tactical and technical elements of building “hockey sense,” I’d like to introduce three exercises to build layers of hockey sense and help players build an understanding and snapshot of what it looks like in the game.

One of the major components of becoming a thoughtful player, one full of hockey sense, is the ability to read and manipulate pressure offensively. This game, because of the use of multiple goals, creates an advantage in the favour of the offensive player and allows them to get a great feel for how their and their defenders movements are connected to creating separation to make plays.

Check out three drills that will build layers of much needed hockey sense . . .

David Manning joined St. Andrew’s College in 2006 as a teacher and coach of hockey, soccer & lacrosse. He holds a Masters Degree in Educational Leadership from Memorial University, as well as a High Performance 1 coaching certification within Hockey Canada. St. Andrew’s College has had dozens of players graduate to play NCAA Division 1 and 3, CHL and professional hockey over his time. St. Andrew’s College holds the distinction as one of a handful of programs globally to have players drafted into the NHL for the past 6 consecutive years. David has a passion for teaching the game, using the game and its representative components. He has presented at a number of seminars and clinics on his game-based methodology and its benefits to player development, learning and enjoyment.